Ilam Park is a 158-acre country park in Ilam in Staffordshire. The park straddles both banks of the River Manifold, and is found five miles northwest of Ashbourne, across in Derbyshire. The park is in the ownership of the National Trust, managed as part of the Trust's South Peak Estate.

The property consists of Ilam Hall and remnants of its gardens, an ancient semi-natural woodland — Hinkley Wood — designated as a Site of Special Scientific Interest (SSSI), noted for its small-leaved and large-leaved limes and their hybrids. 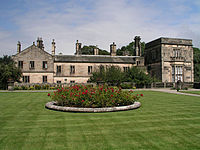 The estate was owned from the 16th century, for over 250 years, by the Port family. It was sold to David Pike Watts in 1809. On his death in 1816, the old hall was inherited by his daughter who had married Jesse Russell. Russell (as Jesse Watts-Russell, High Sheriff of Staffordshire in 1819) commissioned James Trubshaw to build a new Hall to designs by John Shaw; the Hall, now a Grade II* listed building, was built between 1821 and 1826.[1]

By the early 1930s it had been sold for demolition. The demolition was well advanced when Sir Robert McDougal bought it for the Trust, on the understanding that the remaining parts (namely the entrance porch and hall, the Great Hall and the service wing) be used as a Youth Hostel. Today Ilam Hall is leased to the Youth Hostels Association (England & Wales) (YHA).