Harborne is a suburban village lying to the south-west of Birmingham and forming part of that city’s outgrowth, though it retains a distinct village centre and local identity. Harborne lies in Staffordshire.

The village is three miles south-west of Birmingham city centre. The old parish covered an area of 3,300 acres of which 100 acres was of woodland and plantations. At the industrial Revolution however all this changed, and this little Staffordshire parish, which meets the main body of the county only at its narrow, northern neck, was swept up by the growth of Birmingham.

Harborne today is a thriving and prosperous Victorian suburb with a large stock of housing dating from pre-1900 found mainly around the High Street, and the early 20th century. The oldest part of what is known locally as 'Harborne Village' is centred on St Peter's Church, Church of England, Old Church Road, which dates from Anglo-Saxon times (St Chad preached there) and whose tower was (re)constructed in the 14th century. 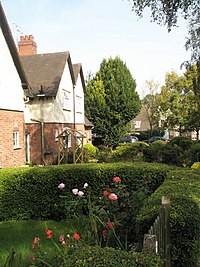 There is also some evidence of a Roman fort around the Queen Elizabeth Hospital Birmingham and Metchley Park,[1][2] near Harborne.

The earliest written mention of Harborne is an entry in the Domesday Book of 1086,[3] however the settlement pre-dates this.

The former City of Birmingham fire station, now divided up and converted into private homes

While the Quakers were strong elsewhere around the city – Bournville just to the south was a Quaker foundation by the Cadbury family – Harborne was outside their influence and became well-supplied with public houses compared to nearby areas such as Edgbaston and Bournville where the demon drink was shunned.

The spelling of Harborne has appeared with several variations through the centuries, and the derivation of the place name has often been disputed. One of the more probable suggestions is 'boundary brook', although 'high brow' and 'dirty brook' are also possibilities.

St Mary’s Church was the first Roman Catholic congregation formed by the Passionists who worshiped in a disused Methodist Chapel on Harborne High Street from 1870. Building work started on the current church, in Vivian Road, on 8 September 1875 and it opened on 6 February 1877. Augustinian 'Austin Friars' arrived at St Mary’s in 1973 to a growing Roman Catholic population and work on a new church, attached to the side of the old church, started on 1 August 1977 and was finished in 56 weeks. The St Mary's Parish Centre was opened in 1990 and is next door to the church.

Harborne railway station, at the end of the short Harborne Branch Line off the London, Midland and Scottish Railway Birmingham-Wolverhampton line at Ladywood, opened on 10 August 1874. It closed to passengers on 26 November 1934 and to freight traffic in November 1963. It is now the Harborne Walkway, a two-mile nature walk and cycling route from Harborne to Ladywood, where the canal can be followed either to Birmingham or Wolverhampton.