Tamworth is a large market town on the border of Staffordshire with Warwickshire. The majority of the town lies in Warwickshire, but as the church lies in Staffordshire, the town is generally considered as belonging to Staffordshire.[1] The border between the two is marked by the Ashby Road from the north, running down Gungate, then west along Church Street, south along Silver Street and Holloway, and then following the old course of the River Tame through the castle grounds.

This is a town of great history; Tamworth was once a capital of Mercia, and the hill on which its bold castle stands above the town centre has been a fortress at least since those days. The statue of Queen Æthelflæd, Lady of the Mercians beneath its ramparts recalls her liberation of the town from the Danes and its place as her capital thereafter.

Tamworth takes its name from the River Tame, which flows through it, as does the River Anker. Its main sites are Tamworth Castle and the Moat House.

The town's main industries include logistics, engineering, clothing, brick, tile and paper manufacture. It was also home to the Reliant car company, which produced the famous (or infamous) three-wheeled Robin model and the Scimitar sports car for several decades.

Tamworth has existed since Saxon times [2] and in the reign of King Offa, was the capital of Mercia[3] the largest of all English kingdoms of its time, and was the largest town in the Midlands. This is largely because of its strategic position at the meeting point of two rivers (the Tame and the Anker), which meant the town was perfectly placed as a centre of trade and industry.

The town was later sacked by the Danes in 874. The town remained a ruin until 913 when Æthelflæd, Lady of the Mercians, the daughter of King Alfred the Great, rebuilt the town and constructed a burh to defend the town against further Danish invaders. She made Tamworth her principal residence and died there in 918. Her statue stands beneath the castle, a sympathetically imagined work in which she is shown with her hand on the head of a child; her foster-son and nephew who became King Athelstan.

In Tamworth's church in 926, a sister of King Æthelstan, perhaps Saint Edith of Polesworth, was married to Sihtric Cáech, the Norse King of York and Dublin, and the church is believed to be named after her. Sihtric died soon after and Athelstan assumed rule of the north. In 943, the church was destroyed by another Danish raid and it was rebuilt by King Edgar in 963. 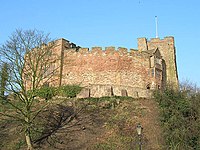 In the 11th century, a Norman castle was built on the probable site of the Saxon fort, which still stands to this day as an important tourist attraction. Grants of borough privileges, including rights to a third additional fair in 1588 consolidated Tamworth’s historic importance as ‘the seat of Saxon kings’.

In the Middle Ages Tamworth was a small market town. However the king gave it charters in 1319. In 1337 Tamworth was granted the right to hold two annual fairs, attracting merchants from across the land.

In 1345 Tamworth suffered a disastrous fire, and much of the town burned.

James I, the first Stuart king of England, visited Tamworth in 1619 and was accommodated by Sir John Ferrers at Tamworth Castle. The Prince of Wales (the future King Charles I) was entertained by William Comberford at the Moat House.

Tamworth Castle was besieged by parliamentarian forces during the Civil War in 1643. An order was issued for the castle to be destroyed but this was not carried out.

Tamworth continued to grow and remained one of the most populous towns in the Midlands by 1670, when the combined hearth tax returns from Warwickshire and Staffordshire list a total of some 320 households. Its strategic trade advantage lay with control of the two vital packhorse bridges across the Anker and the Tame on the route from London to Chester. While it remained a local market town, it did a brisk trade providing travellers with the staple bread, ale and accommodation, maintaining trading links as far afield as Bristol. Charles II’s reconfirmation of its borough's privileges in 1663 gave the town an added boost, as confirmed by Richard Blome's description f its celebrated market, well served with corn, provisions and lean cattle.

In 1678 the town's future Member of Parliament Thomas Guy founded almshouses in Tamworth, rebuilt in 1913. He also built Tamworth Town Hall in 1701 and later founded Guy's Hospital in London.

There were a number of improvements to Tamworth during the 19th century. In 1807 the pavements were flagged. From 1835 Tamworth had gaslight. In the late 19th century a piped water supply was created.

The town grew rapidly in the 18th and 19th centuries during the Industrial Revolution, benefitting from the surrounding coal mines. It also became a hub of the canal network, with the Coventry Canal and the Birmingham and Fazeley Canal being built through the town. Later, the railways arrived with the Midland Railway route from Derby to Birmingham arriving in Tamworth in 1847, and later the London and North Western Railway, which provided direct trains to the capital. A split-level station exists where the two main lines cross each another, the higher level platforms (on the Derby to Birmingham line), being at right angles to the lower ones on the main line to London.

The first municipal cemetery opened in 1876. The Assembly Rooms were built in 1889. In 1897 the corporation bought Tamworth Castle.

The Victorian Prime Minister Sir Robert Peel served as the town's Member of Parliament from 1830 until his death in 1850. He lived at the nearby Drayton Manor. It was in Tamworth that Robert Peel unveiled his Tamworth Manifesto in 1834 which created what is now the modern [[Conservative Party Conservative Party and its philospohy.

During the 19th century a breed of pig called Tamworth Pig was initially bred here using some imported Irish stock.

Samuel Parkes who won the Victoria Cross in the Charge of the Light Brigade was born in Wigginton and baptised at St Editha's on 24 December 1815. His parents, Thomas and Lydia, are buried in its churchyard.

Tamworth grew rapidly in the postwar years as it soaked up overspill from the Black Country to the south-west. A population of about 7,000 in 1931 had risen to some 13,000 just after the Second World War; this figure remained fairly static until the late 1960s when a major expansion plan was implemented. Although not officially a "New Town", Tamworth's expansion resembled the development of many new towns. As part of this plan the town boundaries were expanded to include the industrial area around Wilnecote to the south. The 1961 population of the new enlarged area was 25,000. In 1971 it was 40,000; in 1981, 64,000; in 1991, 68,000 and in 2001, 72,000, meaning that the town's population had almost doubled within 30 years.

The Reliant Motor Company was founded in Tamworth in 1935 by T.L.Williams, and cars such as the Scimitar four wheeled sports cars and the Reliant Robin three wheeled economy cars were manufactured here until the company moved to Cannock in 1998. A year later the old factory was razed to the ground and a new housing estate built in its place called "Scimitar Park" with street names assuming names of Reliant vehicles (for example Robin Close).

The A5 £26,000,000 5-mile dual-carriageway Fazeley, Two Gates and Wilnecote Bypass opened in July 1995, acting both as a bypass of Watling Street, and as a fast route for traffic into the town. This was further extended to meet the M6 Toll and A38 in 2005. The road's official name is Thomas Guy Way.

The Snowdome, the UK's first full-sized real-snow indoor ski slope is located in Tamworth, and only a short distance away is Drayton Manor Theme Park.

The main road running through Tamworth is the A5. The M42 motorway runs to the east of Tamworth and the town is served by junction 10 which also contains Tamworth services.

In 1868 The Tamworth Herald was launched by Daniel Addison, with its original premises in Silver Street. Mr Addison continued to publish the paper for nine years until 29 October 1877, when it was taken over by a consortium of leading townsmen. The paper now has its offices on the town's Ventura Park industrial estate.