Tipton is believed to have its name from an otherwise unknown ma named 'Tibba', so that Tibbantun would be "Tibba's estate". It appears as 'Tibintone' in the Domesday Book.

Tipton was once one of the most heavily industrialised towns in the Black Country, but most of its factories closed during the 1980s and new housing estates have been built on the site of many former factories, the new private homes have seen an upturn in Tipton's fortunes by rising house prices.

Tividale has a relatively high percentage of ethnic minority residents, mostly Mohammedans of Pakistani origin, but the Princes End and Great Bridge areas are predominantly occupied by White residents.

Churches in Tipton include: 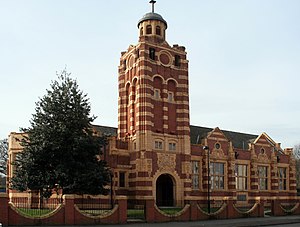 Until the 18th century, Tipton was a collection of small hamlets. Industrial growth started in the town when ironstone and coal were discovered in the 1770s. A number of canals were built through the town and later railways, which greatly accelerated the pace of industrialisation.

The engineer James Watt built his first steam engine [1] in or very near Tipton in the 1770s, which was used to pump water from the mines. In 1780, James Keir and Alexander Blair set up a chemical works there, making vast quantities of alkali and soap.

The massive expansion in iron and coal industries led to the population of Tipton expanding rapidly through the 19th century, going from 4,000 at the beginning of the century to 30,000 at the end. Tipton gained a reputation as being "the quintessence of the Black Country" because chimneys of local factories belched heavy pollution into the air, whilst houses and factories were built side by side. Most of the traditional industries which once dominated the town have since disappeared.

The Black Country Living Museum in nearby Dudley re-creates life in the early 20th century Black Country, in original buildings which have been painstakingly rebuilt and furnished. There is a residential canal basin at the museum - Tipton was once known as the Venice of the Midlands because it had so many canals, although some of the 'minor' canals in the town were filled-in during the 1970s. The canals today form a vital cycling, wildlife and leisure facility.

The town has retained a traditional horse-keeping culture; private horses are kept freely on public land and are occasionally 'trotted' on roads (pulling a rider on a lightweight racing cart). There are also "tatters" (i.e. rag-and-bone men), who also have links to the horse culture. Despite persistent council attempts to clear horses off public land, horses still appear in parks and on canal banks from time to time.

During Second World War there were a number of air raids on the town. On 19 November 1940, a man was killed by a Luftwaffe bomb which was dropped in Bloomfield Road and destroyed several buildings including The Star public house; this was rebuilt after the war but demolished in 1996. On 17 May 1941, six people died in an air raid in New Road, Great Bridge, which killed six people including a local doctor. The Tipton Tavern (later rebuilt as the Hallbridge Arms) and New Road Methodist Church was destroyed and a number of nearby houses were damaged.[2] Aside enemy action, on 21 December 1940 a tragedy struck at the Boat Inn, Tividale. A stray anti-aircraft shell fired from a gun on the Dudley-Rowley Regis border fell on the public house during the wedding reception of Sidney Jones and Florence Pottinger. 13 people died as a result of their injuries, including the bride and her younger brother David; eight of the victims were from Tipton. The groom lost both of his legs and many other people were injured as a result. The pub was later completely rebuilt, only to be demolished in 2004. A total of 20 people died as a result of air raids in Tipton during the war.

Until 1966, the town had its own council. The Urban District Council of Tipton was formed in 1894 but received County Borough status in 1938.[3]

The headquarters were originally based in a 19th-century building on Owen Street, near the railway station, until 1935 when it relocated to the former Bean offices site on Sedgley Road West, straddling the border with Coseley. The council remained at this site for the next 31 years, until the dissolution of the borough council in April 1966. The building was later taken over by Dudley College who retained it until about 1993. It has since been occupied by various businesses.

Tipton was one of the key towns in the Industrial Revolution of the 19th century, and even during the 18th century it had established its first key industries. This included the world's first successful steam pumping engine, which was erected at Conygre Coalworks in 1712 by industrialist Thomas Newcomen. A full size replica of the engine now exists at the Black Country Living Museum just over Tipton's borders in Dudley.[1]

In 1800, it was a predominantly rural area with just a few coal mines and some 4,000 residents. However, mass building of factories and digging of Coal mining|coal mines took place, and resulted in Tipton becoming a heavily built up and industrialised area with more than 30,000 residents by the end of the 19th century. The town's population grew further in the 20th century as new housing developments, mostly by the local council but with a significant number in the private sector as well, took place.

However, coal mining had disappeared from Tipton by the mid 20th century, and the town lost a large percentage of its factories during the recessions of the 1970s and 1980s, which contributed to a rise in unemployment and poverty in the Tipton, although living conditions continued to improve.

Bean Cars, a company that manufactured cars and lorry engines and other vehicle parts had a factory in Tipton [4]

Further industrial sites have been abandoned since the 1970s, paving the way for mass private house building on the land previously occupied by factories.[5] This includes the town's naptha gas plant, which opened in 1965 but closed just 10 years later due to the emergence of natural gas from the North Sea. Standbridge Park housing estate was built on its site during the 1990s.[2]

The Newcastle upon Tyne based adult comic Viz used Tipton as a perennial butt of jokes throughout the 1990s, involving a fictitious councillor, Hugo Guthrie. Guthrie may, however, have been based on the real inter-war figure of Councillor Doughty who forbade any more pubs to open until one was opened carrying his name. The pub carrying his name, the Doughty Arms, opened in 1923 but was renamed the "Pie Factory" in 1987.

The British comedy film Anita and Me, set in the 1970s, was set and filmed in Tipton.