The Hall, with its embattled towers and walls, has been the home of the Bagot family since the late 14th century. The present house is mainly Elizabethan, with a Gothic façade added in the 1820s to a design probably by John Buckler.

In 1945 the Hall, then in a neglected and dilapidated state, was sold by Gerald Bagot, 5th Baron Bagot, together with its 650-acre estate to South Staffordshire Waterworks Company, whose intention was to build a reservoir (completed in 1953). The 5th Baron died in 1946 having sold many of the contents of the house. His successor and cousin Caryl Bagot, 6th Baron Bagot, repurchased the property and thirty acres of land from the water company and began an extensive programme of renovation and restoration.

In September 1959 Lord Bagot sold Blithfield Hall at an open auction held in the Shrewsbury Arms, Rugeley. The property was bought for £12,000 by his wife Nancy, Lady Bagot.[1]

The 6th Baron died in 1961. In 1986, the Hall was divided into four separate houses. The main part which incorporates the Great Hall is owned by the Bagot Jewitt Trust. The Bagot Jewitt family remain in residence. 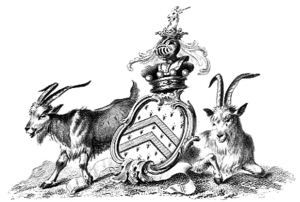 Arms of the Barons Bagot

Blithfield Hall is known as the home of a breed of goat, the Bagot goat (which appears on the arms of the family).

The part of the parish known as Bagot's Bromley took its name from ownership by the family since 1360.[2] Bagot's Wood, the remains of the ancient Needwood Forest also takes its name from the Bagots.