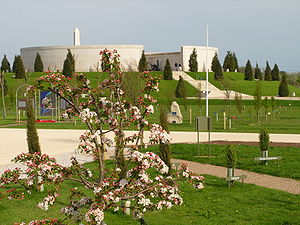 The National Memorial Arboretum, is a garden at Alrewas in Staffordshire managed by the Royal British Legion. It was established as a national site of remembrance, giving its purpose as:

The National Memorial Arboretum honours the fallen, recognises service and sacrifice and fosters pride in our country. It is a spiritually uplifting place and is emerging as a world-renowned centre for remembrance.[1]

The Arboretum is in Staffordshire, just south of Alrewas on approximately 150 acres of old gravel workings, five miles north of Lichfield. It is beside the meeting of the River Tame with the River Trent. It is at the western end of the 'National Forest', just off the A38 road.

The idea for the Arboretum was conceived by David Childs in 1988. He believed that it would form a living tribute to service men and women for future generations to reflect upon and enjoy. The Arboretum was officially opened on 16 May 2001. It is a registered charity[2] and is part of The Royal British Legion family of charities.

The Arboretum contains over 50,000 trees, and more being added each year.[3]

There are nearly 300 memorials for the armed forces, civilian organisations and voluntary bodies who have played a part in serving the country; and even Simon the ship's cat of HMS Amethyst. Several corporate war memorials – from British banks, building societies, and insurance companies – have been relocated to the grounds,[4] when the original owners became unable or unwilling to care for them. At the heart of the Arboretum is the Armed Forces Memorial, which is a tribute to over 16,000 service personnel who have lost their lives in conflict or as a result of terrorism since the end of the Second World War.[5] At 11 am on 11 November each year the sun shines through two slits in the outer and inner walls of the memorial, casting a shaft of light across a wreath in the centre.[6]

Within the Arboretum is the Millennium Chapel of Peace and Forgiveness where, at 11 am each day, an act of remembrance takes place. Following the two minutes silence, accompanied by the Last Post and Reveille, there is an introductory talk about the arboretum.[7]

The Armed Forces Memorial was dedicated in October 2007 by the Archbishop of Canterbury in the presence of the Queen.

In 2010, the Volunteers of the National Memorial Arboretum were awarded the Queen's Award for Voluntary Service, the highest award that any voluntary group can receive.

Some of the other features of the National Memorial Arboretum are described below.

On 15 June 2014 a memorial to the naval personnel was unveiled. It is made of a number of large pieces of coloured glass.[10]

On 12 December 2014, a memorial on the centenary of the World War I Christmas truce, when British and German soldiers stopped fighting and played football, was unveiled by Prince William, Duke of Cambridge and the England national football team manager Roy Hodgson.[11] The Football Remembers memorial was designed by ten-year-old schoolboy Spencer Turner after a nationwide competition.[11]