The Rudyard Lake Steam Railway is a ridable miniature railway a mile and a half long running on a 10 feet 3" gauge track. It is the third railway to run along the side of Rudyard Lake in Staffordshire.

The railway runs on a mile and a half on the track bed of an old standard gauge North Staffordshire Railway line. After the NSR line closed down, a small narrow gauge train ran on the site for two years before moving to Suffolk (and thence to Trago Mills in Devon).

The current line started in 1985 and is 10' 3" gauge, and operates to a timetable. It was built by Peter Hanton of Congleton working on his own over a period of 10 years. He sold the railway to the Rudyard Lake Steam Railway Ltd in October 2000 who have developed it since that date.

Trains are about half the size a normal narrow gauge railway and are steam hauled. The railway runs from Rudyard railway station to the Dam then along the side of the lake to terminate by the lakeside at Hunthouse Wood. This is about a mile south of the site of the old Cliffe Park railway station.

Trains run on Sundays and Bank Holidays from January to the end of November, with more regular services from Easter to October and daily during school holidays. The railway is a member of Britain's Great Little Railways and was a member of the Heritage Railway Association.

The railway has six steam locomotives, mostly named by the owner's wife after the legends of King Arthur: 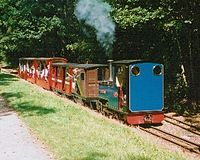 Merlin runs along the side of Rudyard Lake

These are normally only used for maintenance although even for these duties the railway is now using its steam locomotives year round in preference to locomotives powered by internal combustion engines as they are proving more economical and reliable.

Visiting steam locomotives often attend the annual steam gala held each year over a weekend in late September. The 2011 guest locomotive was Victoria from the closed Isle of Mull railway which remains at Rudyard and is used sometimes on normal services.

A fleet of 13 carriages and a wide variety of goods wagons are also used. A further enclosed brake carriage was constructed in 2011 and brought into service in August and another 12 seat enclosed coach added in December 2012.

Rudyard Station comprises Platform 1 with a shelter where the trains depart. A footbridge links this to Platform 2 where the cafe, a large covered picnic area, signal box and toilets are located. Platform 2 is in fact the original standard gauge platform built by the North Staffordshire Railway. The original flower beds and retaining walls are clearly visible. At a higher level than platform 1 its a good vantage point. To the south end of the station are the engine shed, water tower, coal bunker, storage shed and workshop.

The railway offers learn to drive a steam train courses, of either a half or full day for individuals or groups. Children's parties are hosted and the Platform 2 Cafe provides hot and cold refreshments from April to October