Stone is an old market town in Staffordshire, about equidistantly 7 miles north of Stafford and south of Stoke-on-Trent. It is a town on the ancient main roads and river and long of importance as a hub of communication.

The town's name means is exactly what it says "stone", from the Old English stan.

The local story is that the town was named after the pile of stones taken from the River Trent raised on the graves of the two princes, Ruffin and Wulfad, killed in AD 665 by their father, King Wulfhere of Mercia, because of their conversion to Christianity.

The Church, built over these stones in 670 lasted until the 9th century before being destroyed by invading Danes.

Stone was at one time the capital of early Mercia, a powerful early English kingdom that later expanded over the whoe of the Midlands, until the main capital moved to Stafford,

In 1135 an Augustinian priory, Stone Priory, was founded in the town, which survived until the Dissolution of the Monasteries in the reign of King Henry VIII.

The Common Plot (also known as the Mudley Pits) is a large area of open and wooded common land sited just to the north of the town of Stone. The Duke of Cumberland built extensive winter fortifications and a camp here, the traces of which can still be seen, during the Winter of 1745/46. The purpose of the camp was to bring the Duke's army down from the freezing Staffordshire Moorlands and Peak District, where they had been seeking to stop a clandestine advance on London by a force of 6,000 Jacobite rebels thought to be using the old pack-horse routes over the high country in order to reach Derby. Stone was also strategic in preventing any break-away Jacobite group from heading west to recruit from sympathisers in the old Midland families and Wales. The Jacobites did take Derby but went no further and retreated back to the Highlands where they were exterminated.

The buildings of the Priory collapsed in 1749 and the present church of St Michael's was built in 1758. All that remains of the original priory is the rib-vaulted undercroft which forms the foundations beneath Priory House, which is located on Lichfield Street opposite the Frank Jordan Community Centre.

Stone stands in the valley of the River Trent, and was an important stopping-off point for stagecoaches on one of the roads turnpiked]] in the 18th century. A directory for 1851 says that:

Stone was a very lively town, and a great thoroughfare for coaches, carriers and travellers…. No fewer than 38 stage coaches passed through the town daily.

The main coaching route was the London to Holyhead route, on Watling Street as far as Lichfield and then from Lichfield to Holyhead on Telford's new road (now the route of the A51).

To support the coaching trade Stone was a principle stopping point with many coaching inns to refresh both horses and travellers. Notable hostelries include the Crown Hotel, Crown & Anchor, Red Lion and the Black Horse Inn.

James Brindley, the canal builder, put forward the scheme to build what he called the Grand Trunk Canal to connect the two rivers, Mersey and Trent in 1766. It was backed by Josiah Wedgwood who saw that it offered an efficient way to bring raw materials to the potteries and to transport finished wares to his customers. By 29 September 1772 48 miles of the Grand Trunk Canal (now known as the Trent and Mersey Canal) from Wilden Ferry to Stone was navigable — the length past Burton-on-Trent being completed in 1770. On completion of the Star Lock a grand opening was held, during this opening a cannon was fired in celebration, which struck and damaged the lock, requiring a re-build. Stone became the Headquarters of the canal company with its office at Westbridge House, below Star Lock on what is now Westbridge Park.

Due to the quality of the local water beneath Stone two brewers were located here carrying on the tradition of beer making that the Augustinian monks started. Firstly, the most notable was John Joule & Sons Ltd, established in 1780.[1] The company was acquired by Bass Charrington in 1968, and ceased brewing at the end of October 1974.[1] The adjacent bottling plant was closed on the 31st October 1974 though bottling itself had ceased some years before. The canal played a great part in the export of Beer. Joules once owned a pair of boats that delivered coal to the brewery and as late as the 1950s had the telephone number ‘Stone 1’. Joules draught beer stores and bottling plant remains an imposing building on the canal and can be clearly identified by the red cross logo of John Joules in the brickwork.

The second brewer was Montgomery & Co, acquired by the Bent's Brewery Co, of Liverpool in 1889. The brewery was located on what is now Mount Industrial Estate. This brewery was also taken over by Bass and closed on the 31st March 1968. Although the brewing industry in Stone ceased following the closure of Joules and Bents following aggressive take over from the nearby Burton upon Trent Brewers in the 1960s and 1970s, in recent years it has begun anew with the opening of the "Lymestone Brewery" in 2008. This family run micro brewery is based in part of the original Bents brewery.(www.lymestonebrewery.co.uk) More recently a second microbrewery, trading under the name Joules, dropping the 'John' due to trademark reasons, has begun brewing in Shropshire. A pint of both Lymestone and Joules can be tasted at the Swan Inn.

The Star Public House was fully licensed in 1819 although the building predates the canal by some 200 years. The building has in its time been a butcher’s shop and slaughterhouse. Stabling for boat horses was available up to the 1950s and the business relied heavily on the canal for trade. 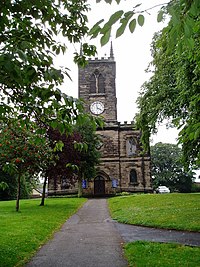 Stone parish church, dedicated to St Michael the Archangel, is at the south end of the town located on what used to be Stone Priory. It was commenced in 1753, and finished in 1758. The present clock dates from 1896.

Christ Church stands on the north side of the town, where the population is still increasing. It was erected in 1839.

The canal still dominates the town. Many canal side sites have in recent times been taken over for modern day use including ‘The Moorings’ a development of apartments based on the old Stubbs warehouse and also apartments and housing surround the old Trent Hospital, once the Workhouse. Housing developments also border the canal. Commercial traffic has now been replaced by the leisure craft that pass through Stone each year. The Canal Cruising Company today operates from the historic site of the canal maintenance and boat building operations of the Trent and Mersey Canal Company. This restored docks complex with its workshops, by Yard Lock, continues to be used for the maintenance of pleasure craft and historic boats. In 2009, a new marina is due to be developed just south of the town, below Aston Lock with moorings for pleasure craft, a farm shop and a cafe.

The National Association of Chimney Sweeps is located in the town.[2]

The River Trent, which runs through the town, had been used for cargo-carrying vessels since Roman times but further inland smaller boats could only be used. Seasonal fluctuations in water depth proved insurmountable, although cargo could be carried from the sea as far south as Wilden Ferry (southeast of Derby), where the River Derwent joins the Trent and increases the quantity of water, then onwards by road. Until to tarmac roads, journeys overland by roads were slow and delicate wares were prone to breakages over the rough terrain, which considerations led to the building of the Grand Trunk Canal (now the Trent and Mersey Canal, which passes through the town.

Two trunk roads go through Stone; the A34 linking Birmingham to Manchester and the A51 linking Lichfield to Chester. Stone is by-passed by the M6 motorway.