The Roaches is the name given to a prominent rocky ridge situated above Leek in Staffordshire and over the Tittesworth Reservoir in the Staffordshire Moorlands. The ridge with its spectacular rock formations rises steeply to 1,657 feet.[1]

The name of the ridge is from the French les roches - the rocks.

Along with Ramshaw Rocks and Hen Cloud the Roaches form a gritstone escarpment, which is very popular with hikers, rock climbers and freerunners. It is often very busy especially at weekends. The local mountain rescue team is a regular attendee to this popular crag.

The Roaches Estate which includes Hen Cloud was purchased by the Peak District National Park Authority in the 1980s to safeguard the area from adverse development. From May 2013 Staffordshire Wildlife Trust will take on the management of the iconic Roaches Estate. The British Mountaineering Council maintain a mountain hut named in memory of Don Whillans in the area.

In clear conditions, it is possible to see much of Cheshire and views stretching as far as Snowdon in Caernarfonshire and Winter Hill in Lancashire.

The Roaches are the most prominent part of a curving ridge which extends for several miles from Hen Cloud in the south to Back Forest and Hangingstone in the northwest. At the top there is a small pool called Doxey Pool that is, according to legend, inhabited by a water spirit. Nearby are the broad hills of Gun and Morridge. 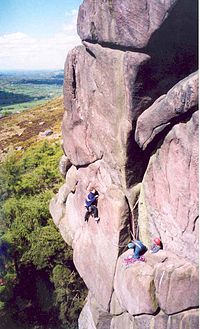 Climbers on Valkyrie at The Roaches

The Roaches, Hen Cloud and Ramshaw Rocks are formed from a thick bed of coarse sandstone ('gritstone') of Namurian age, a subdivision of the NW European Carboniferous system from ca 315 to 326.4 Ma, which occurs widely across the Peak District and takes its name — the Roaches Grit — from this location. The nearby Five Clouds are formed from a thinner bed of similar sandstone known as the Five Clouds Sandstone. These sandstones originated as delta sands dropped by major rivers draining a mountainous landmass to the north. The sandstone beds of both The Roaches and Hen Cloud dip moderately steeply to the east into the north–south-aligned syncline known as the Goyt Trough. The same beds at Ramshaw Rocks dip steeply to the northwest into the syncline. The southern end of the Roaches is defined by the presence of an east–west fault that runs through the col separating the Roaches from Hen Cloud.[2]

In the 1930s five Australian Bennett's wallabies were released into the wild from a private collection.[3] A small colony is believed to continue to live there.[4][5]

In 2008, a pair of peregrine falcons successfully bred on the Roaches, causing climbing on part of the rock face to be suspended for a period.[6]

Doxey Pool is a small pool of water that measures about 50 feet by 30 feet and can be found along the top path of The Roaches. It is not very deep but is still a distinctive feature when you find it. This area is great for walking but is also a popular climbing area.[7]

Legend has it that this pool is inhabited by a mermaid called Jenny Greenteeth known as the blue nymph. The legend says that she fell in the pool on a foggy day whilst walking along the top of the Roaches. Ever since that day she has been enticing unsuspecting victims down to the pool and to their watery grave.[8]