From Wikishire
(Redirected from Flash, Staffordshire)
Jump to: navigation, search

Flash is a village of Staffordshire, within the Staffordshire Moorlands (and the Peak District National Park). The village was an early centre for Wesleyanism.

Flash is the main village in Quarnford Parish. It lies just off the A53 main road about 3 miles southwest of Buxton. It is on the southern slope of the highest ground on Axe Edge Moor, which rises to a peak of 1,808 feet. The parish of Flash forms the Staffordshire corner of Three Shire Head, the point at a packhorse bridge on a tributary of the River Dane, where Staffordshire, Derbyshire and Cheshire meet.

This general area has much geographical interest. To the south is Morridge, with a trig point at 1,604 feet at Merryton Low which provides outstanding sunset views across the Cheshire Plain and The Roaches. Also in this area are the Ramshaw Rocks, a part of the range which includes Hen Cloud and The Roaches. The famous "Winking Man" is a combination of upright stones on Ramshaw Rocks, which is seen to wink as one travels the A53.

Other interesting features include caves on the west side of Axe Edge, one of which is known as "The Devil's Hole" from some strange sounds heard there when the wind blows in the right direction.

At 1,519 feet above sea level, Flash claims to be the highest village in Great Britain. In 2007 the claim was upheld by the BBC, which settled a dispute with its rival claimant, Wanlockhead in Dumfriesshire, within the Southern Uplands. The Ordnance Survey measured the highest house in each village and Flash was higher, although the results were disputed by residents of the Dumfriesshire village.[1] More recently the claim has been disputed by the residents of Nenthead in Cumberland.

During the first half of the 19th century the population of the parish was around 700; it had reduced to half that by the end of the 1800s. In 1851 there were 40 agricultural labourers, about the same number of silk workers, and almost as many colliers. There were also stonemasons, dressmakers, blacksmiths and cordwainers, and a shoemaker, errand boy, wheelwright, game-keeper, grocer, peddlar and tailor, as well as a number of house servants, 275 young people and 50 scholars. At one time 29 families were receiving weekly relief and 23 families occasional relief, nearly a quarter of the population.

The first record of coalmining in the parish comes from 1401 when Thomas Smith took a year's lease on the 'vein coal' of Black Brook, near Upper Hulme. There were a large number of coal pits in the area, including Orchard Common, Blackclough, Hope, Goldsitch and Knotbury. They were worked throughout the 18th and 19th centuries, and some into the early 20th century, for both commercial and domestic use.

As an isolated community, Flash has a small population and a school which houses 7 pupils. It formerly had a reputation for being a centre for illegal activities such as cock fighting and counterfeiting ('Flash money').[3] Prizefighting was said to have taken place at Three Shires Head.[4]

According to some sources,[5] the counterfeit money manufactured at Flash used to be exchanged at the nearby Three Shires Head (where Staffordshire, Cheshire and Derbyshire meet) on Axe Edge Moor.

Wesleyan Methodism was so well-established in Flash during the 18th century that a chapel was built as early as 1784. At this time, there were 61 Methodist "members of Society".[6] This account suggests that Flash became a centre from which Methodism spread into other neighbouring villages, for example Hollinsclough[7] 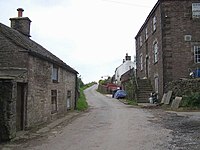