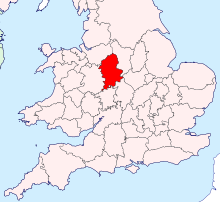 Banner of the arms of Staffordshire Council

The Staffordshire flag is the flag of the county of Stafford, registered with the Flag Institute on 28 March 2016.[1]

An alternate flag offered for sale commercially is a banner of the arms of Staffordshire County Council and as such is the property of the council and only represents it, not the wider county.

Before the flag was adopted, the council flag had been flown alongside the Union Flag above the Department for Communities and Local Government.[2] It was also adopted by the crew of the RFA Wave Ruler in 2010, as its captain is from Stafford.[3]