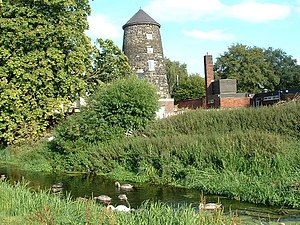 The Broad Eye Windmill is an historic windmill in Stafford, the county town of Staffordshire. The mill was built in the eighteenth century and ceased to grind in 1897. Today it provides a home for Stafford Radio,[1] and is looked after by the Friends of Broad Eye Windmill.

The mill operated as a mill for exactly 100 years, until the sails were removed in 1897. Over the next 100 or so years, numerous businesses operated from the Broad Eye Windmill, including a butchers, but none lasted, probably due to the restrictive curved interior of the building.

Though the town had three water mills, by the late eighteenth century not enough flour could be produced to feed the poor of Stafford, as large amounts were being shipped to Birmingham on the Staffordshire and Worcestershire Canal (built in 1772). Furthermore, high prices were being charged by the mills, as a result of the corn laws. To feed local people, work started on the Broad Eye Windmill in 1796, which was completed in the early 1800s. Allotment land was made available at Broad Eye for the project, which is one of the lowest lying areas of the Stafford area, sited next to the River Sow.

Using stone from the early Shire Hall, in its day, at a height of sixty three feet, the windmill was the highest in the Midlands and originally had a conical cap and seven floors, of which only the upper four floors were used for flour production.[2]

In 1835, to keep up with demand, a steam engine was placed in the lower floors to keep up production when the wind forbore to blow. However, this only partly rectified the situation. When the mainline railway arrived in 1837, flour production could not keep up with local demand as Stafford was growing so quickly, but also the new rail links allowed bakers to bring in cheap flour from further afield, with which the Broad Eye Windmill could not compete. Furthermore, due to the demand for finer, white flour which could not be produced at the Broad Eye Windmill, by 1896, the mill reached the end of its life in its intended form, and in the following year, in 1897, the sails and winding gear were removed.

In 1919, the lower part of the windmill was converted into a shop, and, from the early 1920s until 1931, it was trading as a butcher’s shop.[3] Photographs of the windmill's time as a shop still remain. American troops used the mill as a wartime store place but it later fell derelict, before being listed as a Grade II listed building in 1951.

In 1966, a local trust was created to look after the mill, the Friends of Broad Eye Windmill,[4] with the idea of returning it to its former glory, whilst establishing a heritage and education centre within. They aim to renew damaged oak support beams, joists and floorboards so the next storey can be used as a museum and heritage centre. Inside the windmill lie artifacts and photographs relating to the Windmill and Stafford's industrial past. Currently, only the ground floor and basement are accessible.[5]

In 2011, Stafford Radio, a local community radio station, started broadcasting from the Broad Eye Windmill. As well as being based in the Mill, the station works with the windmill members to assist with fundraising and renovation, and to help promote the windmill.