Not to be confused with Fordon, Yorkshire

Forden is a parish consisting of several settlements near Welshpool in Montgomeryshire.

Looking down on the parish is the Long Mountain, which stretches north eastwards from Forden as far as the border between Montgomeryshire and Shropshire.

Traces of a Roman road and of a Roman camp called locally "the Gaer" are near the River Severn, in a township of the parish called Thornbury.[1]

In 1868, the National Gazetteer said of the parish

FORDEN, a parish in the hundred of Cawrse, county Montgomery, North Wales, 3 miles N. of Montgomery, and 4 S.E. of Welshpool, its post town. The Oswestry and Newtown railway has a station at each of these towns. Forden is situated on the eastern bank of the river Severn, near Offa's Dyke, and includes the townships of Hem, Kilkewyd, and several others. The Welsh suffered defeat here in the reign of Edward I. The living is a perpetual curacy in the diocese of Hereford, value £112, in the patronage of the Grocers' Company. The church is dedicated to St Michael. It contains monuments of the Devereux family. There are a few charities, producing about £4 per annum. There is a National school. The principal building in the parish is the House of Industry for the district of Montgomery and Pool. In the neighbourhood are remains of entrenched camps.[2]

The parish church of St Michael and All Angels, about half a mile to the west of the road from Welshpool to Montgomery, was enlarged in 1830. For some three hundred years the church was the burial-place of the family of Devereux, whose estate at Nantcribba was within the parish. The marble font, oval in shape, was presented in 1794 by Richard Edmunds, Esq.[1] 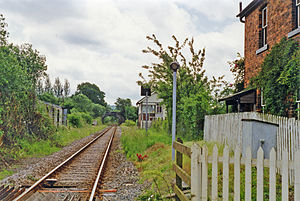 Remains of the station which closed in 1965