Llangurig is a village and parish in Montgomeryshire, lying on the River Wye. The population is 670.

Llangurig is reputed to be the highest village in Wales at an altitude of 1,000ft. The A470 trunk road passes through the village as do the National Cycle Route 8 and the Wye Valley Walk.

The 15th century parish church located in the village is dedicated to Saint Curig, its reputed founder, and is a grade II* listed building. There are also two small chapels.

The village has been home for many decades to a craft shop as well as two public houses, a number of bed and breakfasts and a small village shop and Post Office. The manor house, Clochfaen Hall, was designed by architect, William Arthur Smith Benson a designer of the Arts and Crafts movement. He also designed the drinking fountain between the road and the village green, the erection of which commemorates the completion of the village's piped water supply, a scheme begun by Colonel Lloyd-Verney to whom the fountain is also a memorial.[1]

Llangurig had a small primary school until 2008. In January 2003 the school had only 19 pupils[2] but fought a successful campaign against closure by the local council.[3] The school eventually closed at the end of the 2008 academic year.[4]

The village holds an annual agricultural show and sheepdog trials in August.

There have been many famous people who have connections to Llangurig. One of the most famous people to come from Llangurig was Francis Lewis (March 21, 1713 – December 31, 1802) who was a signer of the United States Declaration of Independence as a representative of New York.

Born in Llangurig, he was the child of Morgan Lewis and Anne Pettingale. The Lewis family were a sizable family and have always had a presence in and around the Llangurig area. Many decedents still live in the area today.

'The Railway that never was'

During the Victorian era, Llangurig nearly had a railway service. The Llangurig branch is noted in trivia as being the shortest lived working branch line in the UK, receiving precisely one train.

The rail network was built piecemeal by many small companies, and Parliament mistakenly granted acts for two lines through the same piece of terrain, linking Llanidloes to Aberystwyth: one for the Manchester and Milford Railway; the other for the Mid-Wales Railway. The M&MR intended to connect the two settlements with a route across Wales, to enable the industrialised Northwest to access the deep-water port in Milford Haven, Pembrokeshire. 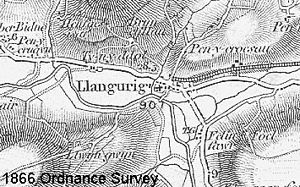 The Llangurig branch line as built

The MWR was authorized to build its line by act of parliament in 1859.[5] The M&M was likewise authorized in 1860. The line was to head west from Llanidloes by way of Llangurig to Pant Mawr, through a tunnel, turning southwards for Ysbyty Ystwyth and Tregaron, finally connecting with the Carmarthen & Cardigan Railway at Pencader.

After resolving difficulties of accessing Llanidloes through the creation of the joint Llanidloes and Newtown Railway, it would extend 1½ miles of double track southwards to Penpontbren, where the MWR and M&MR would diverge. The M&MR and MWR were to pay 5% per annum on construction costs and maintenance. Also the three companies were to pay equal shares of interest and running costs for the new station at Llanidloes. These charges were eventually to prove crippling for the M&MR.

By 1864 the M&MR had changed its plans for crossing the Plynlimon range, and hence stopped all work west of Llangurig. 1866 was a difficult year, including the collapse of the London Bank Overend, Gurney and Company, causing many industrial projects to encounter financial hardship. By 1876 MWR had still failed to build the new route, with an act of parliament permitting abandonment of the scheme. In 1882 the M&MHR started to dismantle the Llangurig branch, lifting 1½ miles of the essentially unused track for maintenance purposes elsewhere.

A large part of the route east of Llangurig is marked on current OS maps as 'dismantled railway', much of the course close to the A470 road through Nant Gwynwydd being clearly visible. Some earthworks and tunnel headings survive from the original M&MR scheme west of Llangurig, as can Llangurig station.[6]

The first Royal Mail Post Bus service was introduced on 20 February 1967. This ran between Llanidloes and Llangurig.