Llanbrynmair is a village and extensive parish in Montgomeryshire on the A470 road between Caersws and Machynlleth. In 2011, it had a population of 920. 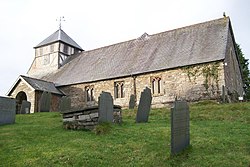 The parish includes several hamlets: Talerddig, Dolfach, Tafolwern, Pandy, Cringoed and Pennant. The original centre is at Llan, on the road to Llanidloes, where the local parish church of St Mary is located. The current centre (formerly called "Wynnstay") at the junction of the A470 and B4518 roads rose to local prominence with the building of the new turnpike road in 1821 and the arrival of the railway line between Newtown and Machynlleth in 1861.

Geographically, the parish includes the valleys of three rivers – Afon Twymyn, Afon Iaen and Afon Rhiw Saeson – and the surrounding uplands. The three rivers join around the main village and flow westwards as the Afon Twymyn towards the River Dovey and Cardigan Bay.

The Cambrian railway line, built in the 1860s, runs through Llanbrynmair and for a time provided an outlet for the mines at Dylife, eight miles south.[1] The village station closed in 1965 as part of the "Beeching closures". There was a level crossing next to the station but, following the accidental death of an American visitor in October 1999 and its description as a "blackspot",[2] the crossing was closed and the road diverted.

A bilingual book was published in 2005 reviewing the history of the parish of Llanbrynmair in the twentieth century compiled by the Llanbrynmair Local History Society. (ISBN 978-0955068409).

Much of the area was part of the large Wynnstay Estate owned for generations by the families of Sir Watcyn Williams Wynne. The connection is noted in the "Wynnstay Arms", a prominent local public house.

The parish of Llanbrynmair played prominent roles in both the "Nonconformist Revolution" of the late 18th Century and the emigration to America during the 19th and early 20th centuries. This cultural revolution was the movement of Welsh religious independents to break from the established Church of England. The parish is reputed to have been the source of the most emigrants, per capita, to America of any in Wales. The first of them departed Llanbrynmair in 1796. A large proportion of these emigrants settled in western Ohio, particularly in the rural farming communities of Paddy's Run (now Shandon), Gomer and Venedocia. The two most prominent emigrants were Edward Bebb and Ezekiel Hughes, who settled in Butler County, Ohio near Paddy's Run. Edward Bebb's son, William, became governor of the State of Ohio. Josiah Jones, hymnologist under the pen name Josiah Brynmair, emigrated to and is buried in Gomer, Ohio. 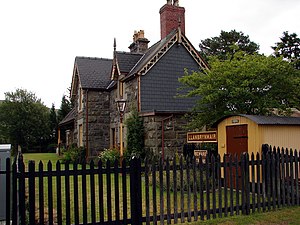