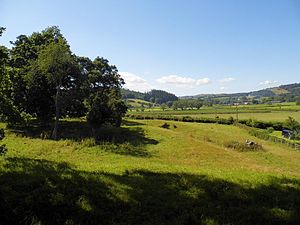 View from the motte at Mathrafal

Mathrafal near Welshpool, in Montgomeryshire, is a site between the rivers Banwy and Vyrnwy which today is a farm but which was once the seat of the Kings and Princes of Powys.

Mathrafal was probably the princely court from the 9th century until its destruction in 1212 by Llywelyn ap Iorwerth (Llywelyn the Great) of Gwynedd.

The site of the princely llys lies on the banks of the River Banwy, just above its confluence with the river Vyrnwy, about three miles north-east of Llanfair Caereinion and six miles north-west of Welshpool on the A495 at its junction with the B4389. 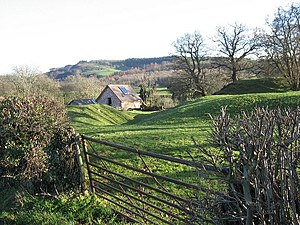 Entry to the earthworks and view towards the motte

The site known today as "Mathrafal Castle" is a 90-yard by 80-yard compound defended by a bank and outer ditch on three sides, the fourth side being the river. Little remains of the original walls.[1]

Mathrafal is the original capital of the Kingdom of Powys,[2] in the cantref of Caereinion. After the division of Powys in 1160 it became the capital of the southern portion which eventually became known as Powys Wenwynwyn.[3]

This structure probably replaced an earlier hill fort, about half a mile away to the north-west, which dates from around 656 at the time of the fall of the neighbouring Kingdom of Pengwern, or perhaps as early as 520 when the capital of Powys was moved from the old Roman town of Viroconium Cornoviorum (Wroxeter).[4]

The motte is 115 feet by 82 feet by 16 feet high motte of Mathrafal Castle dates from around the end of the 12th century and was probably built either by Owain Cyfeiliog (circa 1170) or Robert de Vieuxpont on behalf of King John in 1212.[2] Prince Gwenwynwyn ab Owain of Powys moved his capital from Mathrafal to Welshpool (Y Trallwng) in 1212.[4] Later in 1212, Robert de Vieuxpont was besieged in the castle by the coalition forces of Gwenwynwyn and Llywelyn the Great, he was rescued by King John.[5] The castle was destroyed and never rebuilt.[6][7]

Excavations by the University of York around 1991 found an iron and bronze figurine of St Gwynllyw (or Woolos the Warrior) in a cavity in a window base.[8]