From Wikishire
(Redirected from Llanidloes Without)
Jump to: navigation, search

Llanidloes is a town of Montgomeryshire, high in the mountains in the Hafren Forest and sitting at a meeting of little mountain roads and on the A470 road which joins the Upper Wye Valley to the Upper Severn Valley and on toward Newtown. It is the highest town on the River Severn, the source of which lies just ten miles or so upstream on Plynlimon.

The town is close to the large dam and reservoir Llyn Clywedog. There is a scenic mountain road connecting Machynlleth and Llanidloes.

Llanidloes is popular with hikers who walk on the scenic footpaths surrounding the town, including Glyndwr's Way, which in conjunction with the Offa's Dyke path forms a 160-mile circuit around Mid Wales and local passage over the spine of the Cambrian Mountains.

The Sarn Sabrina Walk, a 25-mile circular walk from Llanidloes to the source of the Severn and back, has been held yearly on the Saturday preceding the Late Spring Bank Holiday since 2006. In 2007 the Semi Sabrina, a 12-mile circular walk, was added. Information on the route can be found on the Llanidloes website. 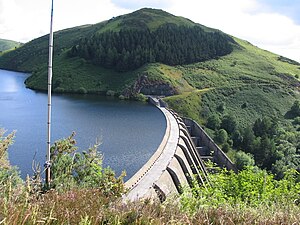 The nearby Llyn Clywedog

The Hafren Forest is also used for car rallies such as Rally GB and motorcycle Enduro events throughout the year.

Llanidloes takes its name from the early seventh century Celtic Saint Idloes, after whom its parish church is named. The town was given a charter to hold a market in 1289 but existed at least 400 years before that, during which time it was part of the cantref of Arwystli.

The area around Llanidloes was once important for the mining of lead and silver, and the town had a thriving flannel industry. It was also notorious as a focus of industrial unrest during the 19th century Chartist demonstrations in 1839, a campaign for democratic rights prompted by the collapse of the local textile industry. During the unrest, three local people were arrested and held in a local hotel until the protesters forced their release. The town was controlled by the protesters until a detachment of Shropshire Yeomanry arrived and restored Government authority. Ringleaders were arrested, tried and sentenced to imprisonment or transportation.

Llanidloes formerly had a railway station, opened in 1864 by the Llanidloes and Newtown Railway. The station building contained the railway company offices. The building is in the Georgian style and resembles an early 19th century Gentleman's country residence. Closer inspection reveals that the scale has been changed - imagine the Georgian gentleman to be 10 feet tall, and the building is then in perfect Georgian proportion. The Llanidloes and Newtown railway eventually formed part of the Mid Wales line of the Cambrian Railway, linking it with Cardiff, but most of this was closed on 31 December 1962. The Llanidloes by-pass road runs along a section of the former railway, and the station still stands beside this road. It is now restored and occupied by small businesses. 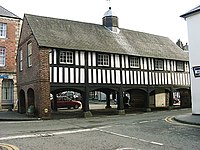 The half-timbered Old Market Hall stands at the crossroads of the four streets of the original mediæval town. Built around 1600, it is the only surviving building of this type in Wales. Assize courts were held in the hall around 1605, and John Wesley preached from a pulpit stone on the open ground floor in 1748.

There are many notable timber framed buildings in the town and St Idloes Church has a 15th-century hammerbeam roof with striking carved angels. When Cwmhir Abbey was dissolved by Henry VIII in 1536, some of its 13th century arches were dismantled and reassembled in St Idloes Church, where they can still be seen. Other local attractions include a museum containing a famous two-headed sheep, and the nearby Hafren Forest, known for its red kites. Two masonry arch bridges, the Long Bridge and the Short Bridge, were designed by Thomas Penson.

The town formerly had a significant industrial component. Apart from textiles, the railway provided an outlet for the nearby Van lead mines and there was an iron-working company (finally closed in the early 1980s) that produced components for mining, railway and other machinery.

Results from a statistical analysis (2003) of the Y chromosome (genetic genealogy) of locals whose paternal grandfather was born within a twenty-mile radius of the town suggests that there was a significant and unique Germanic presence in the area over 1,500 years ago, presumably an early English settlement, but such a settlement is not known to written history.

The headquarters of the Quilt Association is at the Minerva Arts Centre; here they hold workshops and an annual exhibition of quilts.

Llanidloes has a reputation as a very "quirky" town, known for its liberal, counterculture atmosphere (even the police stationed in nearby Newtown call it "Planet Idloes"). Llanidloes is known as a popular home for ageing hippies.[1] The alternative atmosphere is immediately apparent upon visiting, thanks to the presence of a wholefood shop, a volunteer-run organic shop and a vegetarian wholefood café.

In April 2006, Llanidloes was awarded Fairtrade Town status by the Fairtrade Foundation. Since October 2007 the annual Green Fair has attracted visitors to the town to listen to speakers on many 'green' issues and browse the stalls offering alternatives to energy expensive ways of life.

Each year the town hosts the Llanidloes Fancy Dress street party, described by local press as Wales' answer to the Notting Hill Carnival.