Powis Castle is a mediæval castle, fortress and grand country mansion in Montgomeryshire, standing near the town of Welshpool, and the seat of the Earl of Powis.

The castle is known for its extensive, attractive formal gardens, terraces, parkland, deerpark and landscaped estate

Notwithstanding the continued residence of its ancestral masters, the Earls of Powis, the castle today is under the care of the National Trust, who operate it under the name "Powis Castle and Garden".

Princess Victoria (later Queen Victoria) visited the castle as a child when her mother took her to tour of the country in 1832.

Unlike the castles Conway, Caernarvon, Harlech and nearby Montgomery, which were all built by the English kings to keep down the restless native princes, Powis was the fortress of a dynasty of Welsh princes. In 1266 four years after Edward I's conquest of Wales, Owen de la Pole (Owain ap Gruffydd ap Gwenwynwyn), the last hereditary prince of Powis, renounced his royal claim title and was granted the title of Baron de la Pole, (which is to say "of the Pool" a reference to Welshpool, formerly called just "Pool" and the location of Powis Castle). The ancient Kingdom of Powys had included Montgomeryshire, much of Denbighshire, parts of Radnorshire and previously large areas of Shropshire.

Owain's descendant, an illegitimate son of the last Baron Grey of Powis, sold the lordship and castle to Sir Edward Herbert (d. 1595), second son of Sir William Herbert, 1st Earl of Pembroke, in 1579. Sir Edward's wife was a Roman Catholic and the family's stubborn allegiance to Rome and their unshaken devotion to the Stuart kings were to shape the family's destiny for over a century.

On 22 October 1644 Powis Castle was captured by Parliamentary troops and was not returned to the family until the restoration of Charles II. 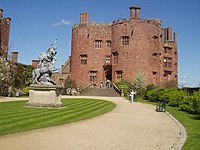 Powis Castle from the courtyard

The magnificent State bedroom was installed in about 1665 and further improvements were carried out during the 1670s and 1680s, possible under the direction of William Winde, who may also have designed the extraordinary terraced gardens. Winde's employer was William, third Lord Powis (c.1626–1696), who was created Earl (1674) and then Marquess (1685) of Powis. Though barred by his Roman Catholicism from high office under Charles II, Lord Powis became one of James II's chief ministers and followed his master into exile in 1688. Thereafter King William III granted the castle to the 1st Earl of Rochford in 1696. The second Marquess was reinstated in 1722, and on the death of the third Marquess in 1748, Powis was inherited by his Protestant kinsman, Henry Arthur Herbert of Oakly Park, Ludlow, who was made Earl of Powis by King George II.

On 6 July 1756 Lord Lyttleton wrote that "About £3,000 laid out upon Powis Castle would make it the most august place in the kingdom" and in 1774 Sir John Cullum remarked: "(Powis's) grand situation, its charming and magnificent prospects, its extensive woody parks of many hundred acres … render it one of the first seats of the Kingdom."

In 1784, Lord Powis's daughter, Lady Henrietta Herbert, married Edward Clive, the eldest son of Clive of India. Their marriage led to the union of the Clive and Powis estates in 1801, and in 1804 the earldom of Powis was recreated for the third time for Edward Clive. Edward then, in accordance with his uncle's will, duly changed his name to Herbert. The Clive fortune paid for long overdue repairs to the castle which were carried out by Sir Robert Smirke. The garden and park were also improved. Part of Clive of India's fine collection of old master paintings, French and English furniture, and Italian curiosities, were brought to the castle.

The final alterations to Powis Castle were undertaken at the beginning of the 20th century by George Frederick Bodley for George Charles Herbert, 4th Earl of Powis (1862–1952) whose wife improved the garden which she felt had the potential to be `the most beautiful in England and Wales'. She died after a car accident in 1929 and Lord Powis also lost his two sons in the First and Second World Wars. In the latter war, the Welsh Girls' School was evacuated to the castle from Ashford, Middlesex.[1] On his death in 1952, he bequeathed the castle and gardens to the National Trust. He was succeeded by his cousin, Edward Herbert (1889–1974), fifth Earl, whose widow, the Countess Powis, remained living in the dower house, and was succeeded in turn by Christian Victor Charles Herbert the sixth Earl.[2]

The Clive Museum features artefacts from India that were collected by the Clives in the 18th century,[3] including textiles, armour, weapons, bronzes, silver pieces, jade, ivory and a formal tent. The museum opened in 1987.[4]

The castle contains the portrait Henrietta Clive, Countess of Powis (1758–1830), painted in 1777 by Sir Joshua Reynolds. The Countess was daughter of Henry Herbert, 1st Earl of Powis and wife of Edward Clive, 1st Earl of Powis. The hat and the lace scarf which she wears in the portrait are not shown in the engraving of 1778 (hung nearby) and appear to have been added by another hand.

A remarkable survival of the 1660s, the State Bedroom is the only one in Britain where a balustrade still rails off the bed alcove from the rest of the room. Such a design derives from the days when the gentry wished to emulate the elaborate etiquette that regulated the court of Louis XIV at Versailles. When improvements to the castle were being considered in 1772, the architect Thomas Farnolls Pritchard recommended that the bedroom be wholly preserved. A visit to the castle by Charles II is still part of the family tradition.

The window latches in the shape of the Prince of Wales's feathers commemorate the visit of the future King Edward VII. His son and daughter-in-law (later King George V and Queen Mary), visited in 1909.

Displayed in the Long Gallery, the marble group of a cat and snake, is Roman and dates from between 1st century BC and 2nd century AD. Representations of cats are rare in Roman art and the Powis group is unique amongst surviving classical sculpture. Two similar compositions in mosaic are known, from Pompeii and at the Vatican Museum, but these both depict a cat attacking a bird.

It seems most likely that the marble was purchased by Clive of India for his wife on his visit to Italy in 1774. The marble was quarried on the Greek island of Thasos and is distinctive for the large embedded crystals which make sculpting difficult. 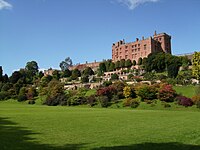 The castle and its terraces from the southeast 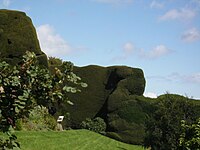 The garden at Powis has survived the 18th century reaction against the formality of earlier garden design, and Powis is thus one of the few places in Britain where a true baroque garden may still be fully appreciated. It seems the terraces were hewn from the rock in the early 1670s under the direction of Frenchman Adrian Duvall of Rouen, although William Winde may also have been involved, up until his death in 1722. The concept for formal or terraces was introduced into northern Europe from the gardens of 16th century Italy.

It seems that Duval may well have been an expert in hydraulics, having been principally responsible for the impressive original water gardens, which were dismantled by 1809. One notable item salvaged from the garden fountains is the lead statue of “Fame”, attributed to the workshop of Dutchman John van Nost (d. 1729), and now situated in The Courtyard. The piece seems to have been struck from the same mould as the Pegasus and fame supplied by van Nost between 1705 and 1716 to Sir Nicholas Shireburn at Stonyhurst, Lancashire.

A great deal of work to restore and improve the gardens was undertaken from 1911 by Violet wife of the fourth Earl, including the laying out of the formal gardens at the far south eastern corner.