Dolforwyn Castle is a mediæval castle above the village of Abermule, in Montgomeryshire. The fortification was established by Llywelyn ap Gruffudd, Prince of Gwynedd, in the late 13th century. It is sited on a wooded ridge commanding excellent views of the upper Severn Valley.

Dolforwyn is a fine example of native Welsh castle design, in contrast to the continental styles adopted by Edward I during his conquests in Wales. 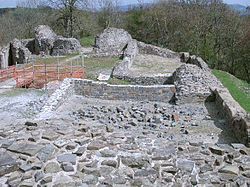 Towards the castle inner ranges and round tower

Llywelyn ap Gruffudd ruled Gwynedd during troubled times: the pressure of expanding Norman marcher lords had caused no pause in the constant wars between the Welsh princes. In order to assert his claim to be the most important of the Welsh princes, Llywelyn sought to established a stronghold outside his domains to assert his authority and control the strategic area of the Severn Valley. In 1257 he invaded the area and by 1263 he had captured the districts known as Cedewain and Ceri. As a result of this King Henry III recognised Llywelyn as Prince of Wales under the terms of the Treaty of Montgomery of 19 September 1267. In order to consolidate his newly conquered lands and to affirm his control, Llywelyn constructed the castle at Dolforwyn between 1273 and 1277 for a recorded cost of £174.6s 8d.

The castle was fairly primitive in its concept compared to some structures to be found elsewhere. A rectangular platform was hewn from the rock some 240 feet by 90 feet and the initial castle consisted of a rectangular keep at the southwest end of the platform and a circular tower at the opposite end. The two structures were subsequently connected by ramparts to make a rectangular shaped enclosure with a D-shaped tower on the northern wall. The enclosed area was divided into two wards by a rock-cut ditch. A two-storey structure was built against the north wall. The main gateway into the castle was in the west wall. A smaller entrance was sited in the south wall.

The castle was built without the authorisation of Llywelyn's overlord, King Edward I of England and tensions grew between Llywelyn them. The King's frontier post at Montgomery Castle was close by, as was a fortress of Gruffydd ap Gwenwynwyn, Prince of Southern Powys, where Powis Castle now stands.

In 1277, shortly after the castle had been completed, Roger Mortimer and Henry de Lacy, Earl of Lincoln besieged Dolforwyn and it fell on 8 April 1277, largely because the castle occupants lacked water (a well had not been dug). Custody was firstly given to Prince Gruffydd ap Gwenwynwyn but subsequently to Roger Mortimer along with the lands of Ceri and Cedewain. The castle's design was then modified by its new English overlords. The south gate was blocked up, new buildings were constructed in the courtyard, and a well was dug.

After Roger Mortimer's death in 1282, the castle passed to his son Edmund Mortimer, then to his son Roger who lost the family estates in 1322 after an act of treason. An inventory taken at the time states Dolforwyn's accommodations which included an armoury in the round tower as well as domestic ranges: a pantry, buttery, kitchen, brewhouse, bakehouse, chapel, hall, a lady's chamber and two granges for the storage of grain.

Dolforwyn appears to have been occupied until the reign of Richard II (1377–99), but by 1381 it was already described as being in poor repair, and in 1398 it was described as being "ruinous and worth nothing." It appears that after this date the castle was almost lost from memory and attracted little interest.

The ownership of the castle passed to the Earls of Powis and was subsequently bought by the grandfather of the antiquarian John Davies Knatchbull Lloyd, who gave the site to the Welsh Ancient Monuments Board (now Cadw) in 1955. Cadw arranged for excavation of the site between 1981 and 2002 and the monument is now open to the public.

In 2009 Cadw undertook a 6-month process of consolidation of the castle masonry. 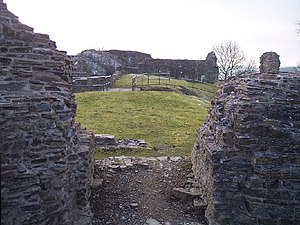 A view through the main gateway into Dolforwyn Castle

According to legend the maiden Sabrina, is said to have drowned at Dolforwyn, and become goddess of the River Severn (Dolforwyn means "maiden's meadow" which may allude to this myth). John Milton in his masque Comus presented at Ludlow Castle in 1645 before the Earl of Bridgewater invokes the spirit Sabrina:[1]

"Sabrina fair
Listen where thou art sitting
Under the glassie, cool, translucent wave,
In twisted braids of lillies knitting
The loose train of thy amber-dripping hair,
Listen for dear honour's sake
Goddess of the silver lake."

Bernard Cornwell, as part of The Warlord Chronicles, uses Dolforwyn in his 1995 book The Winter King.

The entire site of Dolforwyn Castle was archaeologically excavated between 1981 and 2002 as a joint project between the University of York Department of Archaeology and Cadw. Over the course of three decades, students and Cadw employees spent three or four weeks each summer examining specific parts of the castle. The work was under the directorship of Dr Lawrence Butler. The site was also rendered by a team of local masons employed by Cadw.

Finds from these excavations included part of a leather book cover, a small die, a silver coin from the reign of Edward II and a large array of spent stone catapult balls from the English siege of 1277. In the course of the excavations, more than 49 feet of debris and infill was removed to reach the castle's features. These included a small stone lined hall, later repairs to Welsh masonry (shown by different types of mortar), a suspected wheat-drying oven and a cistern/cellar well 20 feet deep (with indication it might be deeper).