Llanfyllin is a small town in Montgomeryshire. The population at the date of the 2001 Census was 1,407.

The town lies in a valley by the Berwyn Mountains in Montgomeryshire, 14 miles southwest of Oswestry, 15 miles from Montgomery, and 180 miles from London. The valley is meanered by two streams, named the rivers Cain and Abel, tributaries which join the River Vyrnwy at Llansantffraid.[1]

The town sits on the main route between Shrewsbury and Bala[1] long time key markets towns in this trading area of Wales and the Welsh borders. In the suburb of Bodyddon, there exists evidence of both an early Britons settlement, and a Roman road which leads directly towards Offas Dyke.[1]

The town is known for its holy well, dedicated to Saint Myllin who baptised people at Fynnon Coed y Llanin, which drew early settlers.[1]

Granted its charter by Llywelyn ap Dafydd under Edward I, it was confirmed by Edward de Charlton, Lord of Powys under Henry V, making Llanfyllin a market town. In 1644, Charles I spent a night in Llanfyllin, and after having lunch the following day at Brithdir, continued his journey to Chirk Castle.[1]

The remains of a 1599 house exist within the town, in which John Drummond, 1st Earl of Melfort, the Roman Catholic ambassador from James II to the Pope, hid for a while. Then owned by a family called Price, they agreed to hide Drummond while he fled for asylum after the Glorious Revolution.[1]

The Church in Wales parish church of St. Myllin was founded in the seventh century by the Irish Bishop of Hereford, Thomas Mylling. The present building dates back to 1706.

Llanfyllin is also increasingly well known for the old Union Workhouse, known as Y Dolydd locally. Built in 1838 this old Victorian building had stood empty since the mid-1980s until a local voluntary group, the Llanfyllin Workhouse project, got involved and are slowly renovating it to a make local centre for Arts, Creativity and Environment. It is also home to the renowned Llanfyllin Workhouse Festival.

The town has a single primary school, and the Llanfyllin High School, with approximately 1,000 pupils.[2] It has consistently performs well at GCSE level (5 GCSEs, grades A*-C),[2] with the latest Estyn inspection report rating it at 71%, 15th place of secondary schools in Wales. 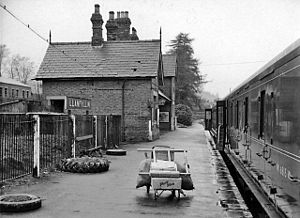 Until 1960, Llanfyllin station was the terminus of the former-Cambrian Railways Llanfyllin Branch, which connected to Oswestry via Llanymynech

The town sits on the main route between Shrewsbury and Bala,[1] key markets towns in this trading area of Wales and the Welsh borders. The A490 road connects the town to Churchstoke, and terminates just after passing through the town.

The Llanfyllin Branch of the Cambrian Railways opened in 1863, to enable access to the limestone quarries along the valley, terminating at Llanfyllin station.[3] The mainline from Oswestry to Newtown closed in 1965, as resultantly did the branchline to Llanfyllin, under British Railways Beeching Axe.