From Wikishire
(Redirected from Hafod Uchtryd)
Jump to: navigation, search 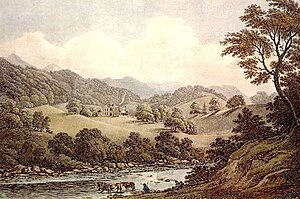 The Hafod Estate, also known as Hafod Uchtryd (meaning "Summer mansion of Uchtryd") is a wooded and landscaped estate in Cardiganshire, in the Ystwyth valley. This was once the estate surrounding a grand country house, Hafod Uchtryd, which was demolished in the 1958, leaving the estate to forestry, conservationists and holiday cottages.

The estate is in the hills, near Devil's Bridge, Cwmystwyth and Pont-rhyd-y-groes off the B4574 road - which is described by the Automobile Association as one of the ten most scenic drives in the world.[1]

Hafod Uchtryd was anciently the location of a dwelling on the side of the hill above the River Ystwyth, looking to the east. First used as a hunting lodge for the local chieftain, it became home to landed gentry and nobility, and in the late eighteenth century became a celebrated landscape, under the ownership of Thomas Johnes.[2]

The lands of the Hafod Uchtryd were within the boundaries of the Cistercian Abbey, Strata Florida.

After the Dissolution of the Monasteries by king Henry VIII (1536–1540) during the Reformation the abbey's holdings were divided and awarded to new tenants. Some of the Strata Florida lands were granted to the Herbert family, who came to Cardiganshire during the reign of Elizabeth I. Sir Richard Herbert of Pengelly and Cwmystwyth served as Sheriff of Cardigan in 1542-1543.

A rent roll dated 1540 for the granges of Mevenith, Cwmystwyth and Hafodwen (‘newe leases’) reveals that W[illia]m Herbert and Morgan Herbert were tenants of several properties formerly belonging to the Abbey of Strata Florida, including significantly:

The estate became famous in the late 18th century when its owner, Thomas Johnes (1748-1816), developed it as a showpiece of the Picturesque idea of landscape; the estate and the Gothic house were the subject of many descriptions and images produced by contemporary visitors. The history of the estate is the subject of several books, most notably Peacocks in Paradise by Elizabeth Inglis Jones,[4] and the Hafod Landscape by Jennifer Macve.[5]

The estate lies within the parish of Llanfihangel y Creuddyn. St. Michael (Hafod), Eglwys Newydd, Llanfihangel-y-Creuddyn was a chapel-of-ease in that parish, and was rebuilt for Thomas Johnes by James Wyatt in 1801. It is near Llanddewi-Brefi. 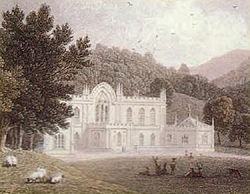 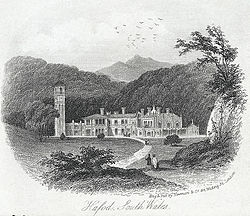 Hafod with later additions to the house 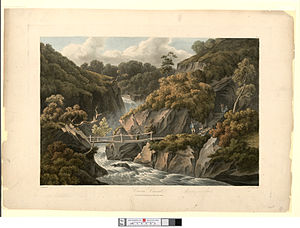 Between 1790 and 1810 were the golden years of the Hafod Estate. Between 1782 and 1813 approximately 1,000 to 1,200 acres of forest, mainly Larch and Scots Pine were planted on high ground by the estate owner Colonel Thomas Johnes, with oak and beech on the lower, more fertile land. In spite of two months of little rain, of 80,000 larch planted in April 1796, only 200 died. Following a visit to the estate in 1798 by Charles Howard, 11th Duke of Norfolk, the President of the Royal Society of Arts, Johnes was encouraged to offer himself for the awards made by the Society for silviculture. He was awarded five Gold Medals.

Approximately three million trees were planted on the estate during the tenancy of Colonel Johnes.

In 1833 the estate, surrounding structures and land were purchased by the Duke of Newcastle and in 1846 by Sir Henry de Hoghton of Lancashire,[6] but he again sold it eleven years later to William Chambers.

From 1890 to 1940 Thomas James Waddingham owned the estate. He adopted Hafod as his home. He learned Welsh, sat as a Justice of the Peace and was involved in local affairs for the rest of his life. He leased the Myherin Forest area of the Estate to the Forestry Commission in 1929. After he ran out of money, he lived in Aberystwyth from 1932 to his death in 1938, aged 98.[7]

In 1946 Hafod Uchtryd, the mansion, was left vacant and by 1958 the house was derelict. It was demolished that year. Only the stables remain, as the current estate offices, and a large pile of rubble. Other isolated buildings and cottages also survive, at least one of which may be rented as holiday accommodation.

Today the Hafod estate occupies some 500 acres of the Ystwyth valley and surrounding hills. Most is owned by Natural Resources Wales which, in partnership with the Hafod Trust,[7] is managing conservation and restoration projects with public and private funding. In 1998, the Hafod Estate received a grant of £330,000 from the Heritage Lottery Fund. A detailed management plan has been prepared and is now being implemented.

The Estate employs one full-time and two part-time management and administrative staff, a horse logger,[8] and various contract workers, and has recently appointed two crafts-people. Their roles are to ensure that the management plan is carried out to the highest standards.

Visitors today can follow many a waymarked walk that captures the ‘Spirit of Place’ which is Hafod. The Estate is popular with tourists who wish to enjoy some of the most picturesque views and pleasant walks in Wales. The walks have names such as ‘The Gentleman’s Walk’, ‘The Bedford Monument Walk’ and ‘The Alpine Bridge Walk.’