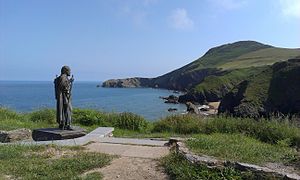 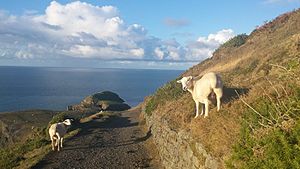 The coastal path above the village

Llangrannog is a small, coastal village and seaside resort in Cardiganshire, seven miles south of New Quay. According to the United Kingdom Census 2001, the population of Llangrannog was then 796 people.[1]

It lies in the narrow valley of the little River Hawen, which falls as a waterfall near the middle of the village.

The earliest parts of the village (the "church village") lie above the waterfall and are hidden by a twist of the valley so that they cannot be seen from the sea. This protected them from the attention of sea marauders, the Vikings and the Irish. After the mid-eighteenth century the sea became safer and a "beach village" and small seaport developed. By 1825 Llangrannog commercial activity was largely concerned with the sea, including the shipment of coal. A number of ships were built on the sands, the largest being the "Ann Catherine" a brig of 211 tons. The most recent developments, in the 1860s, were the "ribbon village" which connected the beach and church villages and an extension of the beach village onto the southern slopes of the valley.

The church is dedicated to Caranog or Carantoc, son of Corun ab Caredig ab Cunedda, a sixth-century saint and founder of several churches in Wales. It consists of a nave and chancel connected through a pointed arch. On either side of the entrance to the chancel is an ornamental pew. The left one bears the date 1674 and belonged to Pigeonsford, a local mansion. The right one is dated 1718 and belonged to Moel Ivor and Cwmowen.[2]

The economy is now dominated by tourism. By the beach there is a shop, two pubs - The Ship and the Pentre Arms - and two cafes. The Ceredigion Coast Path passes through the village.

The summer camp of the Urdd - a Welsh Youth Movement - is located near the village of Llangrannog. The first camp held here was in 1932, in a field on nearby Cefn Cwrt farm. In its early days the camp consisted of wooden huts (for the girls) and tents for the boys, and catering was basic, being provided by the campers themselves. The field was rented by the movement until 1968 when the whole farm was put up for sale. The Urdd movement purchased the farm, together with 160 acres of land, constructing permanent buildings on the site to provide a quality leisure and educational facility. Also on site is a dry ski slope, a go-kart track and a swimming pool; horse-riding is also offered. Catering today is provided professionally.[3][4]

According to legend Carreg Bica (Bica's rock), a large sea-weathered stack of Ordovician rock on the beach, is the tooth of the giant Bica who lived in Cardiganshire, and was forced to spit his tooth onto the beach following a bad toothache. In some versions of the story Bica has been romanised as Neptune.

Edward Elgar once spent a holiday in Llangrannog. Artist Christopher Williams visited and painted here. His painting "Holidays - Village Girls at Llangrannog" is in the collection of the National Library of Wales.

Dylan Thomas visited Llangrannog whilst he was living in New Quay in 1944-45. He came to the Ship Inn with Tommy Herbert, the Aberaeron vet, and with Ira Jones, the World War One fighter ace.[5]

Sarah Jane Rees was born in Llangrannog and is buried in the church yard. A precocious child, by the age of 15 she had learned navigation from her sea captain father and went on to obtain her Masters Certificate. She taught navigation in a school she founded to help local seamen better themselves. In 1865 she won the crown in the Aberystwyth National Eisteddfod under the bardic name of Cranogwen. She became a popular lay-preacher and eventually gave up school teaching to concentrate on preaching and on establishing the South Wales Women’s Temperance Union in 1901 to counter the harm done by alcohol among the working classes. [6]

Llangrannog has a football team called Crannog, who play in the Ceredigion League.

Panorama, looking back from the beach