Aberporth is a small seaside town in Cardiganshire, on Cardigan Bay south of Penbryn. Its beach has earned Blue flag status.[1]

The town is at the southern end of Cardigan Bay about six miles north of Cardigan and ten miles south of New Quay, approximately two miles west of the A487, on the B4333 and about 2 miles from Tresaith.

The Church in Wales parish church is St Cynwyl's. The church is open daily and visitors are welcome to attend services.

It is a small church that was renovated in 1857, but has decayed in the last few decades and modernisation is long overdue. Although the congregation is mainly elderly there is an active children's club associated with the primary school.

In the 16th century, Aberporth was a subsidiary landing point for the port of Cardigan. Boats, nets and salt for preserving were brought in from Ireland. It developed rapidly in the late 17th and early 18th centuries as local people began to take part in the maritime trade. It became a very active port with the northernmost of the two beaches extending into the river valley and provided a safe anchorage. Limekilns, coalyards and warehouses were built on its south shore.

Aberporth developed into one of the main centres of the herring fishing industry in Wales. Drifting and netting were both employed and at one time at least 20 full-time herring smacks went to sea regularly. The industry persisted until the beginning of the First World War when fish stocks declined. Crab and lobster fishing continues on a small scale to this day. 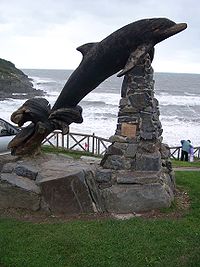 The main industries are Ministry of Defence work at the QinetiQ missile range, and tourism.

ParcAberporth is located near here, and has become a noted centre of excellence in the sectors of defence, aerospace and in particular the developing technology of unmanned aerial vehicles (UAVs). ParcAberporth is linked with the world class research facilities at the nearby University of Wales, Aberystwyth.

The picturesque village overlooks two sandy beaches and is one of Cardiganshire’s favourite holiday destinations, proving popular with tourists throughout Western Europe. Rock pools are exposed at low tides and the cliff top walks along the Cardiganshire coast offer extensive views.

Bottlenose dolphins are seen frequently close to shore. In 2006 killer whales and harbour porpoises have also been seen but such sightings are rare. Even rarer was a turtle seen in 2005. Sunfish and basking sharks are often seen offshore in the summer.

Aberporth is a popular recreational fishing village in the summer and is also popular with divers and boating people. It has two good beaches and has been awarded a blue flag for its beaches several years running due to the high water quality found in this area.

The Met Office has a weather station at Aberporth.[2] It is one of the 22 locations whose reports are included in the BBC Shipping Forecast. Data is available going back to 1941.[3]