Llangybi is a village and parish in the south of Cardiganshire. It is located on the A485 road between Tregaron to the north and Lampeter to the south, a mile and a half north of the village of Betws Bledrws.

The River Dulas flows past the village and joins the River Teifi near Lampeter.

Llangybi is one of three villages in Wales named after Saint Cybi.[1] The local church is also dedicated to Saint Cybi, which currently lies within the deanery of Lampeter of the diocese of St David's, and was at one time in the alternate patronage of the Earl of Lisburne and Lord Carrington.

Llangybi railway station was located on the Carmarthen to Abserystwyth line, closing in February 1965. 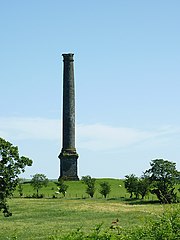 The Derry Ormond Tower is situated very prominently on a spur of hill between the two minor valleys of the Afon Denys and Nant Dyfel and overlooking the Dulas valley. It is said to have been built by local unemployed for the squire of Derry Ormond House. It is a grade II* structure but currently in poor condition with missing stairs. [2]