From Wikishire
(Redirected from Nanteos Mansion)
Jump to: navigation, search

Nanteos is an 18th-century grade I listed former country house in Rhydyfelin, near Aberystwyth in Cardiganshire, which is now a country house hotel.

The current building was constructed between 1738 and 1757 for the Powell family, with Shrewsbury architect Edward Haycock Snr designing the stable block in the 1830s, and William Ritson Coultart designing the east wing and rear offices in 1841. The family occupied the house for some 200 years up until the last of the Powells, Margaret Powell, who died in 1951. At its peak the Nanteos estate comprised some 31,000 acres in 1800,[1] covering most of what is today Aberystwyth and was the major employer of the county.

The name derives from the Welsh for brook (nant) and nightingale (eos).[2]

The house was once the home of the Nanteos Cup. 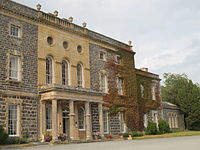 The façade of Nanteos Mansion

The earliest recorded occupier of the estate was Colonel John Jones, a Royalist during the Civil War and Sheriff of Cardiganshire for 1665. He had no sons and so the estate was inherited in 1666 by his daughter Anne, who had married a Dutch mining engineer, Cornelius Le Brun, who in turn became Sheriff in 1676. Their only daughter Averina duly inherited, having married William Powell (1658–1738) of Llechwedd Dyrus, and passed it on in 1738 to their eldest son, Thomas. Thomas had married a wealthy heiress, Mary Frederick, and started to build the present house soon afterwards. He was MP in turn for Cardigan Boroughs and Cardiganshire and died in a London street.

The property then descended in the family to the Reverend William Powell in 1752, who completed the building work. His son Thomas inherited and was High Sheriff in 1785; Thomas's son William Edward was High Sheriff in 1810. It passed further down in the family to Margaret Powell, the widow of Edward Athelstan Lewis Powell, who had died in 1930. Their only son was killed in the First World War and so she bequeathed the property in 1951 to Mrs. Elizabeth Mirylees, a distant relative of her husband, who moved in 1956. She sold it only 11 years later to Geoff and Rose Bliss, who lived there until 1983, opening the building to the public.

Since 1983 there have been several owners but the mansion now operates as a hotel. In 2004 it was purchased by the Saxoncourt Group.