The Ystwyth is a river in Cardiganshire. The length of the main river is 20½ miles and its catchment area covers 75 square miles.[1] Its source is a number of streams that include the Afon Diliw, located on the west slopes of Plynlimon on the border of Cardiganshire and Montgomeryshire in the Cambrian Mountains.[2] 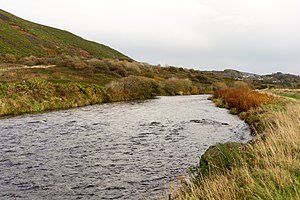 The river flows generally westwards before draining into Cardigan Bay at Aberystwyth where it shares the harbour with the River Rheidol.[3]

The Ystwyth valley is now sparsely populated with only a few towns and villages such as Ysbyty Ystwyth, Cwm Ystwyth, Pont-rhyd-y-groes, Llanilar and Llanfarian. In previous centuries, however, the Ystwyth valley was relatively densely populated due to its mineral wealth. Silver, lead and zinc have been mined in the valley since Roman times, an activity that reached its peak in the 18th century. The largest of the very many mines was Cwm Ystwyth Mine. It is reputed that the average age at death of the miners in Cwm Ystwyth was 32, largely because of acute lead poisoning. There is no active metal mining in the Ystwyth valley today.

The River still carries elevated levels of lead, zinc and silver in its water, mostly due to seepage from abandoned mine tailings and discharges from mine adits.

Away from the abandoned mine workings, the river valley is one of the most beautiful in Wales with steep wooded banks carrying crystal-clear water. It is especially beautiful in autumn. That season tends to bring large numbers of visitors to parts of the upper valley.