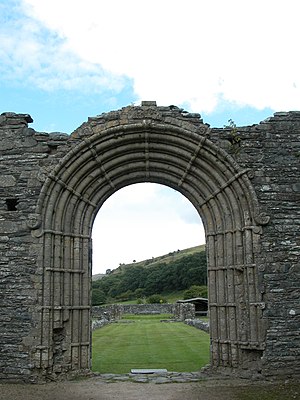 Strata Florida Abbey (Welsh: Abaty Ystrad Fflur) is a former Cistercian abbey situated just outside Pontrhydfendigaid, near Tregaron in Cardiganshire. The abbey was originally founded in 1164.

The name Strata Florida is a Latin translation of the Welsh Ystrad Fflur, which means "Valley of Flowers", though referring to the River Fflur which flows by here; the river is presumably named for the flowers on its banks.[1]

After the region around St David's was firmly occupied by the Norman Marcher lordship of Pembroke by the early 12th century, the princely House of Dinefwr, of Deheubarth transferred their patronage to Strata Florida, interring many of their family members there.

Lying mostly in ruins, there is a variety of remains in the area. The Abbey Church monument is in the care of Cadw. Next to the remains of the church is the graveyard, which is still active to this day, with many people choosing to be buried there. It is traditionally the burial place of the Welsh language poet, Dafydd ap Gwilym, and a memorial to him is to be found on the site, under a Yew tree. The yew tree is quite famous, although it was quite damaged in storms, when it was hit by lightning. No fewer than eleven princes of the House of Dinefwr of the princely house of Deheubarth were also buried here during the 12th century and 13th century. A stone marker in the Chapter House of the Cadw monument commemorates these princes. The marker is a replica (the original is housed in a small museum).

The only substantive structure remaining is the entrance archway, the Great West Door to the Abbey Church, though low walls marking the extent of the church and six subsidiary chapels remain. A modern roof (visible in the picture) protects an area of mediæval tiling, where one can still make out some of the designs. Inside the small on site museum, some of these tiles have been preserved and put on display. Probably the most well known of these is the 'Man with the Mirror', depicting a mediæval gentleman admiring himself in a mirror.

There is a little confusion over the actual founding of the monastery. It was founded by a group of monks from Whitland Abbey, at a time of very fast expansion of the Cistercians, the White Monks. Building actually began on a different site on the banks of the Afon Fflur (from which the present Abbey takes its name), a short distance from the present site. Currently farm land, there are stories that huge stones were unearthed on the original site, known as Hen Fynachlog (the Old Monastery), though how true this is has yet to be formally investigated. Overall, it is considered that the Abbey was founded around 1164 A.D. thanks to the patronage of the Lord Rhys, which is why many of his descendants were buried there. In 1184, a further charter was issued by Lord Rhys re-affirming Strata Florida as a monastery under the patronage of Deheubarth. 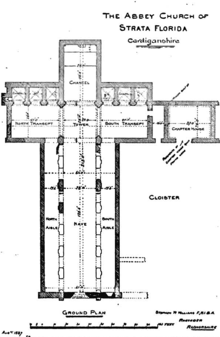 Construction work on the church began, and it was consecrated in 1201.

The monastery in its prime

After its foundation Strata Florida increased in power and authority in Wales. Farms belonging to Strata Florida were spread out across the countryside, and its influence was felt throughout Wales.

It is believed that it is at Strata Florida the most important primary historical source for early Welsh history, the Brut y Tywysogion, was compiled.

Around 1238, not even forty years after the building of the Church, the Welsh Prince Llywelyn ap Iorwerth, also known as Llywelyn the Great held a council at Strata Florida. Here he made the other Welsh Princes swear that they would acknowledge his son Dafydd as his rightful successor.

Strata Florida Abbey was the base of King Henry IV and his son, later to become Henry V, in 1401 during the early years of the rebellion of Owain Glyndŵr. They excluded the monks who had sympathised with Glyndŵr and the Abbey was plundered by the English army as a punishment. The King occupied it as a military base as he planned the capture or defeat of the rebel leaders active in the area. In 1402 the Abbey was held in the King's name under the Earl of Worcester and served as a military base for the further campaigns against the Welsh rebels in 1407 and 1415 when it would have been occupied by several hundred men-at-arms and many archers and foot soldiers enlisted in the King's cause.

Strata Florida was dissolved in 1539 as part of the Dissolution of the Monasteries. The refectory and dormitory were rebuilt into a gentry house, now known as Ty Abaty, which was owned by a number of families, including the Steadmans and the Powells of Nanteos.

Sir John Vaughan, of Trawsgoed, acquired from Thomas Cromwell, 1st Earl of Essex much of the former monastic lands of the Cistercian abbey at Strata Florida. At the same time further land was added to the estate through his marriage to Jane Stedman, daughter of John Stedman of Ystrad Fflur and Cilcennin.[2] 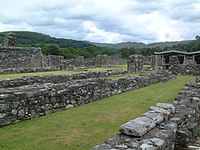 The monastery buildings themselves were largely demolished, with the stone going to be recycled in surrounding buildings, such as potentially the great barn complex by Tŷ Abaty. A complex site, it is still unknown what buildings were contemporary with the monastery and repaired with stone plundered from other Monastery buildings, and which were built new from the plundered stone. It is also unknown whether the present parish church of St. Mary, within the boundaries of the graveyard, was built from robbed stone, or is a rebuild of what would have been the visitor's chapel for the monastery.

Strata Florida was left to deteriorate until the arrival of the railways in the late 19th century. A railway engineer, by the name of Stephen Williams was surveying a possible railway line and took an interest in the ruins. Williams was a founder member of the Cambrian Archaeological Association and the Abbey was visited by the Association in 1848. Following this the Association was to lease the Abbey for its better display and presentation to the public. Williams, who was to become a leading expert on the archaeology of the Cistercian Order was placed in charge of the excavations. Williams undertook a massive excavation there, removing huge amounts of spoil, and uncovering the majority of what we see today. Strata Florida once again became a place of pilgrimage, this time to the wealthy Victorians, who were entertained on trips on the railway, who then could make use of a short bus link to visit the remains themselves. Indeed, a principal station on the Carmarthen Aberystwyth Line was named after the Abbey.

About the Abbey the 1851 Illustrated London Reading Book says: 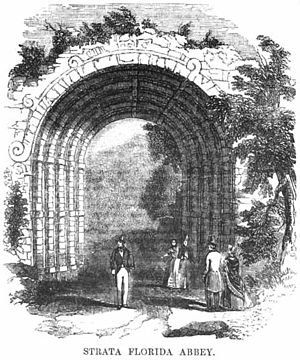 The remains of Strata Florida Abbey, in South Wales, are most interesting in many points of view, more especially as the relics of a stately seminary for learning, founded as early as 1164. The community of the Abbey were Cistercian monks, who soon attained great celebrity, and acquired extensive possessions. They founded a large library that included national records from the earliest periods, works of the bards, and genealogies of the Princes and great families in Wales. The monks also compiled a valuable history of the Principality, down to the death of Llewellyn the Great. When Edward I invaded Wales, he burned the Abbey, but it was rebuilt A.D. 1294.

Extensive woods once flourished in the vicinity of Strata Florida, and its burial-place covered no less than 120 acres. A long list of eminent persons from all parts of Wales were here buried, and amongst them Dafydd ap Gwilym, the famous bard. The churchyard is now reduced to small dimensions; but leaden coffins, doubtless belonging to once celebrated personages, are still found, both there and at a distance from the cemetery. Only a few aged box and yew-trees now remain to tell of the luxuriant verdure that once grew around the Abbey. Of the venerable pile itself, little is left, except an arch, and the fragment of a fine old wall, about forty feet high. A small church now stands within the enclosure, more than commonly interesting from having been built with the materials of the once celebrated Abbey of Strata Florida.