Llanddewi Brefi is a village and parish of approximately 500 people in Cardiganshire.

In the sixth century, Saint David held the Synod of Brefi here and it has borne his name ever since; "Llan" referring in Welsh place names to a church or holy place and Dewi meaning 'David'. Llanddewi Brefi (Welsh, meaning "Church of David on the [River] Brefi", the Brefi being a tributary of the River Teifi),[1] is one of the largest ecclesiastical parishes in Wales. 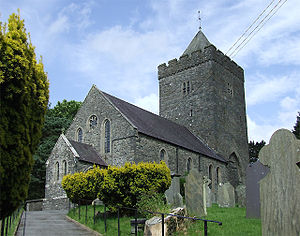 The grade II* listed parish church of St David dates from the 12th century, on a site associated with religious worship since the 7th century. Fragments of much older buildings are incorporated into the Norman church. The church contains a modern statue of Saint David and a collection of Celtic crosses. When the Synod of Brefi was held in the village in the sixth century, it is said that the small hill upon which the church stands marks the spot where the ground was miraculously raised up under St David so that he could be heard better at this synod.

In addition to the Anglican church, there is a non-conformist chapel, two pubs and one village shop. The village and the surrounding area are largely Welsh-speaking and the local economy is dominated by sheep and dairy farming.

A mile to the south-west and still within the parish is the Pont Gogoyan, also a grade II* listed structure, which carries a local over the River Teifi.[2]

In 1977 the village was the scene of one of the world's biggest ever raids involving the drug LSD. Over 6 million tabs of the drug were seized as part of Operation Julie on 26 March of that year.

Llanddewi Brefi was made famous by the BBC television series Little Britain,[3][4] where the character Daffyd Thomas (a variation of the original Welsh name Dafydd; played by Matt Lucas) lives in the fictional village of Llandewi Breffi.[5] Daffyd is a ridiculously obtuse character who believes himself to be "the only gay in the village", and accuses his fellow citizens of homophobia despite their efforts to show acceptance of his sexual orientation and often quite obvious similar leanings.[6]

In one episode of the programme Daffyd decides to run away to London and heads for the railway station to catch the last train of the day, but unlike its fictional counterpart, the village never had its own railway station. The nearest station was at Pont Llanio, situated next to a former milk processing plant approximately a mile outside the village.