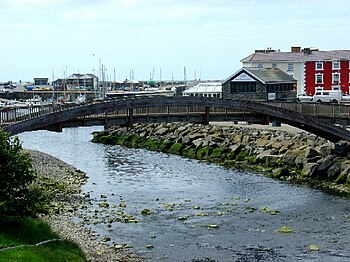 The Aeron at Aberaeron

The River Aeron is a small river in Cardiganshire, that flows into Cardigan Bay at Aberaeron. It is also referred to on some older maps as the River Ayron.

The Aeron has its source in Llyn Eiddwen, in the range of hills called Mynydd Bach. It then follows a more or less westerly and then north westerly track to the sea. It has a rather broad river valley bounded by low hills and has relatively few significant tributaries. Those that it does have include the Gwenffrwd, Nant Wysg, Nant Picadilly, Nant y Wernen and Nant Rhiw Afallan. The Afon Mydr drains an area of old woodlands and dairy farming and includes the old farm of Rhiwbren Fawr.

On its way to the sea, the Aeron passes through Felinfach and by the village of Ciliau Aeron. It passes close to the restored mansion at Llanerchaeron which is now in the care of the National Trust, before entering the picturesque seaside town of Aberaeron where it enters the sea.

Despite the relatively small size of the river, it sustains a population of salmon and brown trout.

Dylan Thomas lived near the banks of the river in the 1940s, at a secluded mansion called Plas Gelli, just outside Talsarn. He called the Aeron valley "the most precious place in the world." The Dylan Thomas Trail follows the river from Talsarn to Aberaeron.

Talsarn was the centre for a thriving group of poets who lived in and around the Aeron valley, such as John Jenkins (Cerngoch), Dan Jenkins Pentrefelin (1856-1946) and Dinah Davies (1851-1931). There are still poets in the valley today, such as the Ciliau Aeron poet, Stevie Krayer, who has written a sequence of poems about the river.[1]

Although the Aeron has suffered from intermittent pollution including some severe incidents in the 1970s caused by creamery waste and crude sewage escapes in the Felinfach area, the principal impacts are now diffuse agricultural waste, pesticides from agriculture and acidification especially from upland forestry plantations.

In Taliesin's poems praising Urien of Rheged, his tells of a victory at Aeron, but here it refers to the River Ayr or Ayr itself in Ayrshire, which once bore the same name when that land was Welsh-speaking.