Repton is a village on the edge of the River Trent floodplain in the south of Derbyshire, about 4½ miles north of Swadlincote. Repton stands close to the county boundary with neighbouring Staffordshire and is as close to Burton upon Trent as to Swadlingcote.

The village is noted for St Wystan's Church, Repton School and the Anglo-Saxon Repton Abbey and mediæval Repton Priory.

At the north edge of the village is St Wystan's Church, an Anglo-Saxon church dedicated to the Anglo-Saxon Saint Wystan (or Wigstan) and designated by English Heritage as a Grade I listed building.[1] The 8th-century crypt beside the church is the burial place to Saint Wigstan, as well as his grandfather, King Wiglaf of Mercia. Also buried there is King Æthelbald of Mercia, under whose reign the building was first constructed, and for whom it was first converted to a mausoleum. Upon the burial of St Wigstan, the crypt became a shrine and place of pilgrimage.[2]

The cruciform Anglo-Saxon church itself has had several additions and restorations throughout its history, including Mediæval Gothic north and south aisles in the nave that were rebuilt in the 13th century and widened early in the 14th century, and the addition in 1340 of the west tower and recessed spire.[3] The church was also restored between 1885 and 1886 by Arthur Blomfield.[4]

Christianity was reintroduced to the Midlands at Repton; here the princes of Mercia and King Peada were baptised in AD 653. Soon a double abbey under an Abbess was built.

In 669 the Bishop of Mercia translated his see from Repton to Lichfield. 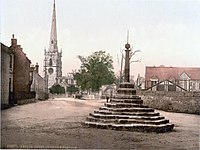 St Wystan's church and the cross in 1890

At the centre of the village is the Church of England parish church of St Wystan. The church is notable for its Anglo-Saxon crypt, which was built in the 8th century AD[5] as a mausoleum for the Mercian royal family. Wystan, or Wigstan, was a prince of Mercia who was murdered by his guardian in 849,[6] in the reign of King Wiglaf. His remains were buried in the crypt at Repton and miracles were ascribed to them. Repton proceeded to become a place of pilgrimage; Wigstan was later canonised and became the patron saint of the church.

In 873/4 the Danish Great Heathen Army overwintered at Repton, the only place in England where a winter encampment has yet been located, identified by a mass grave of some 250 individuals, covered by the kerb stone of its former cairn. The Danes had commandeered the church as a stronghold on the cliff above the former course of the River Trent, identified by a D-shaped enclosure formed by a rampart and ditch, no longer visible on the surface. The bones were disarticulated, long bones stacked together with skulls on top. Forensic study revealed that the individuals ranged in age from their late teens to about forty, four men to every woman. Five associated pennies fit well with the overwintering date of 873/4. The absence of injury marks suggest that the party had perhaps died from some kind of contagious disease.[7]