Edale is a small village in the Peak District of Derbyshire. It is famous as the southern end of the Pennine Way and thus the starting point for many a long journey.

Edale in the summer attacts many walkers with their eyes on the Pennine Way. Some intend the full journey all the way to Kirk Yetholm in Roxburghshire at the northern end of the way, though less ambitious walkers take it too as a good starting point for evening or day walks.

Kinder Scout, the most famous of the ramblers' hills, rises above the village and is the first great hill on the Pennine Way. On its top is the highest point of Derbyshire. Kinder Scout gained its fame from its popularity with factory workers coming out of the great industrial cities, and for the Kinder Scout Mass Trespass of 1932, which led to the opening of the hills. It was to Edale that many of the ramblers came, and still come, to climb to the plateau of Kinder Scout.

The village is accessible by public transport from Sheffield or Manchester and with two pubs supplying real ale and food.

Historically, Edale was the name of the valley of the River Noe. From the Norman Conquest it was within the royal Forest of High Peak and at its centre is the Edale Cross, which marked the boundary of the three wards at the Forest, Campana, Hopedale and Longdendale.

Settlement in the valley consisted of several booths, originally established in the 13th century as 'vaccaries' (cattle farms) along the valley of the River Noe, which have since developed into the hamlets of Upper Booth (once Crowdenley Booth and Over Booth), Barber Booth (once Whitmorely Booth), Grindsbrook Booth, Ollerbrook Booth and Nether Booth (also known as Lady Booth and, formerly, Lower Booth).[2]

When the Sheffield to Manchester (Hope Valley) line opened, the railway station to the south of Grindsbrook Booth was named "Edale", and the name came to be used for the settlements in the parish, rather than the valley as a whole. The valley is usually now referred to as the "Vale of Edale" or, much less frequently, as the "Noe Valley".

Edale is the site of an historic cotton mill built in 1795 on the site of a corn mill and tannery by Nicholas Cresswell in partnership with James Harrison, Robert Blackwell and Joseph Fletcher. Workers were brought in from the towns and accommodated in cottages and in a nearby house called Skinners Hall. Many of the women workers walked each day from Castleton over the thousand-foot Hollins Cross pass. The mill continued spinning cotton until around 1940 but then fell into disuse. It was restored in the early 1970s by the Landmark Trust who sold off six of the apartments to fund the restoration. The Landmark Trust retain one apartment as holiday accommodation. 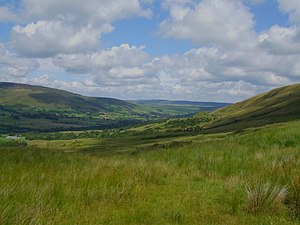 The Vale of Edale

As well as being the start of the Pennine Way (the official start is the Old Nag's Head, a former smithy dating back to 1577), the village is surrounded by walking country which is excellent in its own right. The village is surrounded by hills: the plateau of Kinder Scout to the north, where the highest point in the parish is found, the Great Ridge (running west to east between Rushup Edge over Mam Tor to Lose Hill) to the south and east, Win Hill to the east (outside the parish), and Dalehead (Brown Knoll, Horsehill Tor and Colborne) to the west.

The bed and banks of the River Noe from Barber Booth upstream to approximately the 320 m contour constitute the Edale Site of Special Scientific Interest,[3] cited for geological interest. The "important exposures" of the Edale Shales here contain fossils of technical interest.[4]

180° view from the Pennine Way of the Vale of Edale, half a mile from the Old Nag's Head. The village is obscured by trees towards the left of the picture half way up

There is a youth hostel about a mile from the village centre, several bed and breakfasts, and both pubs also provide accommodation. The pubs also provide food, and there are two cafés. In 2006 a new information and visitor centre was opened at Fieldhead. It was developed by the Moors for the Future Partnership and is owned and operated by the Peak District National Park Authority. Edale is also a popular camping village with two major campsites and numerous others in the surrounding area.

The train service is reasonably frequent for such a rural area, and there is a limited bus service. The short but narrow, twisting and dead-end road to the village centre is not suitable for visitors' cars, and parking in the village centre is almost impossible. However, there is a large pay-and-display car park near the village hall, and parking for rail users at the railway station. Additional parking near the station is provided at busy times by the Parish Council.