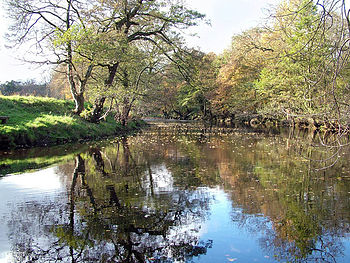 The River Derwent, near Hathersage

The Derwent is a river of Derbyshire, the greatest in the county other than River Trent, of which it is a tributary, and the river on which stands the county town, Derby. The Derwent runs for 66 miles from its source in the Peak District southwards to the River Trent at Shardlow.

Much of the river's route, with the exception of the city of Derby, is rural. However the river has also seen many human uses, and between Matlock and Derby was one of the cradles of the Industrial Revolution, providing power to the first industrial scale cotton mills. Today it provides a water supply to several surrounding cities, and its steeply sided valley is an important communications corridor through the uplands of the Peak District.[1]

Because of its scenic qualities, the valley of the River Derwent sees many tourist visitors. The upper reaches pass through the Peak District National Park, whilst the middle reaches around the old spa town of Matlock which attracts tourists because of its souvenir shops and amusement arcades, together with attractions such as the Heights of Abraham and its cable car.[1][2]

The name "Derwent" is from the ancient British language and is believed to mean "a valley thick with oaks".[3] The word Derw (as in Welsh) means "Oak".

"Derwent" is the name of a number of rivers in Britain, a;; apparently of the same derivation.

The river's name is refected in that of the Roman fort placed in what is now the north of Derby, Derventio. It is found as Deorwent in Old English. Though the name of the city of Derby is thought to be derived from the Danish Dyr by (animal village") it may instead be from the Derwent. 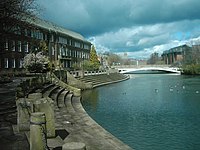 The Derwent outside the Council House in Derby

The River Derwent rises at Swains Greave (1,936 ft above sea level) on the eastern flank of Bleaklow, opposite Howden Moors, and some 6 miles east of Glossop. It flows through the Upper Derwent Valley with its three consecutive reservoirs. In order downstream these are the Howden Reservoir, Derwent Reservoir and Ladybower Reservoir. Howden Reservoir is also fed by the River Westend, whilst Ladybower Reservoir is also fed by the River Ashop. In both cases the former confluences of the two tributaries with the River Derwent are now submerged below the respective reservoirs.[1][4]

After passing through Darley Dale, the Derwent reaches Matlock, where, at an oxbow, it collects the great millstream Bentley Brook. It then flows past the villages of Matlock Bath, Cromford, Whatstandwell, and Ambergate, where it is joined by the River Amber.[4]

Below Ambergate, the river flows by the town of Belper and the villages of Milford and Duffield. It then enters the city of Derby near Darley Abbey and flows through the centre of the city. The river ends at Derwent Mouth, a mile east of the village of Shardlow, and there it enters the River Trent (at a height of 100 feet above sea level; a total drop of 1,836 ft from its source).

The lower river from Derwent Mouth upstream as far as Derby was made navigable under an Act of Parliament of 1720, and this stretch opened to navigation in 1721. Traffic ceased about 1795 and the navigation was acquired by the owners of the competing Derby Canal. The river is no longer considered navigable, although the upper river is widely used by kayakers and canoeists who enjoy the fast flowing water and the slalom course at Matlock Bath.[8][9]

The river was also used to power the many textile mills that were built along the Derwent between Matlock Bath and Derby. Initially, the need for water power was quite modest, for example Lombe's Silk Mill in Derby, which is considered to be the forerunner of the later cotton mills, only needed to use the power provided by a small mill fleam, and Richard Arkwright's Cromford Mill, the world's first water-powered cotton spinning mill, only used a small tributary of the Derwent in conjunction with a lead mine sough.[10] The later mills at Belper, Darley Abbey, and Masson Mill, were much larger and needed to harness the full power of the river to drive the complex machinery within them. This required the construction of large weirs across the Derwent that still remain as significant features in the riverscape.[11]

These sites were all important in the development of the Industrial Revolution, and Arkwright's innovation, along with several local competitors, is recognised today, by the designation of the area as the 'Derwent Valley Mills World Heritage Site'.[12]

The power of the Derwent is still utilised at a number of these historic mill sites, producing hydro-electricity from turbines instead of driving mill wheels, with a recent development being the construction of a hydro-electric station at Longbridge weir, adjacent to the Riverside Gardens in Derby.[13]

The Howden Reservoir and Derwent Reservoir in the upper valley were both completed in 1916 to supply the cities of Sheffield, Nottingham, Derby, and Leicester. The adjacent Ladybower Reservoir was completed in 1945 to cover increasing demand. Treated water from these reservoirs flows down the 28-mile long Derwent Valley Aqueduct parallel to the river. The river also indirectly supplies Carsington Reservoir, with the water taken from the river by a pumping station at Ambergate in times of high flow. When flows are low, water is released back into the river via the same 6½-mile route of tunnels and aqueducts, thus allowing greater abstraction rates downstream at Little Eaton in the drier summer months.

The valley of the Derwent provides an important communications route. Between Derby and Rowsley the valley is followed by the A6 road, which was the main road from London to Manchester until the creation of the motorway network, and is still a busy single-carriageway road. The former Midland Railway's lines from Derby to Sheffield and Manchester also followed the Derwent, the former as far as Ambergate and the latter as far as Rowsley. The Sheffield line still operates as part of the Midland Main Line, but the Manchester line was severed north of Matlock in 1968, and the section from Ambergate to Matlock now forms the Derwent Valley Line, a single-track branch line. Between Ambergate and Cromford, the river, road and railway are also paralleled by the Cromford Canal.The terminus was once connected to Manchester across the High Peak by the early Cromford and High Peak Railway.[4][14]

The tributaries of the Derwent include (alphabetically):