Carlisle Castle stands in the heart of Carlisle in Cumberland, near the ruins of Hadrian's Wall. The castle is over 900 years old and has been the scene of many historical episodes in British history. Given the proximity of Carlisle to the border between England and Scotland, it has been the centre of many wars and invasions. Today the castle is managed by English Heritage and is open to the public.

The castle until recently was the administrative headquarters of the former King's Own Royal Border Regiment now county headquarters to the Duke of Lancaster's Regiment and a museum to the regiment is within the castle walls.

Carlisle Castle was first built during the reign of King William II of England, the son of William the Conqueror, who invaded England in 1066. At that time, Cumberland was still considered a part of Scotland, but William II drove the Scots out and ordered the construction of a Norman style motte and bailey castle in Carlisle on the site of an old Roman fort.

Construction of King William's castle began in 1093. Throughout ensuing ages, the need for a castle in Carlisle was clear, to keep the northern border of England secured against the threat of invasion from Scotland. In 1122, Henry I of England ordered a stone castle to be constructed on the site. Thus a keep and city walls were constructed. The existing Keep dates from somewhere between 1122 and 1135.[1] 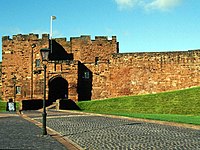 The kings of Scotland and England and the Lords of Galloway struggled over possession of Cumberland and Carlisle and its castle would change hands many times for the next 700 years. The first attempt began during the Anarchy, the troubled reign of King Stephen.

On the 26 March 1296 John 'The Red' Comyn, since the fourth quarter of 1295 Lord of Annandale, led an army across the Solway to attack Carlisle. The then governor of the castle, Robert de Brus, deposed Lord of Annandale, successfully withstood the attack, before forcing the raiders to retreat back through Annandale to Sweetheart Abbey. The Bruces and the Comyns were to clash repeatedly over the lands of Galloway and the throne of Scotland until Robert Bruce ultimately became king.

From the mid-13th century until the unification of England and Scotland in 1603 brought peace, Carlisle Castle was the vital headquarters of the Western March, a buffer zone to protect the western portion of the border against raiders and reivers.

King Henry VIII converted the castle for artillery, employing the engineer Stefan von Haschenperg. For a few months in 1567, Mary, Queen of Scots was imprisoned within the castle, in the Warden’s Tower (which was demolished in 1835).[2] During her reign, Elizabeth I spent more money on the defences of Carlisle Castle than on any other specific military project. After her death though it became redundant.

In 1603, Queen Elizabeth died and James VI of Scotland ascended her throne, thus uniting the realms in his person. The reivers were swiftly put down and order brought to the Middle Shires, rendering the border defences purposeless. The castle saw action though during the Civil War, when it was besieged by the Parliamentary forces for eight months in 1644.

The most important battles for the City of Carlisle and its castle were during the Jacobite rising against King George II in 1745. The forces of Prince Charles Edward Stuart travelled south, reaching as far south as Derby. Carlisle and the castle were seized and fortified by the Jacobites. However they were driven north by the forces of William Augustus, Duke of Cumberland, the son of George II. Carlisle was recaptured, and the Jacobites were jailed and executed. That battle marked the end of the castle's fighting life.

After 1746 the castle became somewhat neglected, although some minor repairs were undertaken such as that of the drawbridge in 1783.[3]

The exterior of Carlisle Castle with the entrance in the centre and the keep behind.