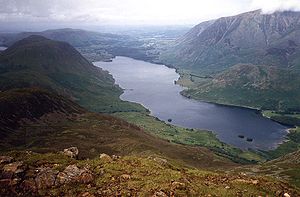 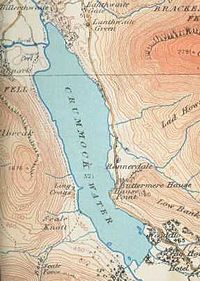 Crummock Water is a lake in Cumberland, within the Lake District. It is two and a half miles long, three quarters of a mile wide and 140 feet deep.

The Water is found between Buttermere to the south and Loweswater to the north. The River Cocker is considered to start at the north of the lake, before then flowing into Lorton Vale. The hill of Mellbreak runs the full length of the lake on its western side; as Alfred Wainwright described it 'no pairing of hill and lake in Lakeland have a closer partnership than these'.

The lake is owned by the National Trust.

Scale Force, the highest waterfall in Cumberland and indeed in the whole Lake District, feeds the lake and has a drop of 170 feet.[1]