From Wikishire
(Redirected from Derwent Water)
Jump to: navigation, search 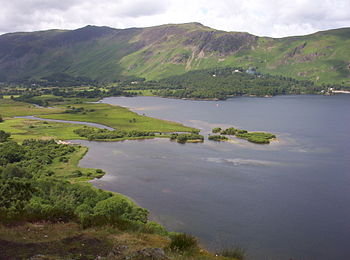 Derwentwater (or Derwent Water) is a lake in Cumberland, and one of the principal bodies of water in the Lake District.

Derwentwater is a place of natural beauty, begirt with high fells whose slopes facing Derwentwater are heavily wooded.

The lake occupies part of Borrowdale and lies immediately south of the town of Keswick. It is both fed and drained by the River Derwent. It measures approximately 3 miles long by a mile wide and is some 72 feet deep.

There are several islands within the lake, one of which is inhabited. Derwent Island House, an 18th century residence, is a tenanted National Trust property open to the public on five days each year.

Map of the water

Derwentwater gave its name to the Earls of Derwentwater. The name of Derwent Water itself is Old Welsh, from the ancient language once spoken amongst the fells; "Water" is of course English, but "Derwent" echoses the Welsh derw ("oak") and went is a common place-name element usually indicating "water".

The lake is believed to be the last remaining native habitat of the vendace (Coregonus vandesius) fish from the 4 originally known sites: Bassenthwaite Lake and Derwent Water in the Lake District and the Castle Loch & Mill Loch in Lochmaben.[1]

A regular passenger launch operates on the lake, taking passengers between various landing stages. There are seven lakeside marinas, the most popular stops being: Keswick, Portinscale and the Lodore Falls, from which boats may be hired. Recreational walking is a major tourist activity in the area and an extensive network of footpaths exists within the hills and woods surrounding the lake.

The Keswick—Borrowdale road runs along the eastern shore of the lake and carries a regular bus service. There is a lesser, or unclassified, road along the western shore connecting the villages of Grange and Portinscale.

Derwentwater from the northern shore near Keswick

A view of Derwentwater from Catbells on the western side