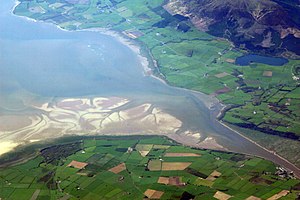 The estuary of the Nith opening into Solway Firth

The Solway Firth is a firth which opens up into the Irish Sea between Dumfriesshire and Cumberland, formed as the estuary of the River Eden and the River Esk. It waters the coasts of those counties as well as those of Kirkcudbrightshire and Wigtownshire. The firth may be reckoned to stretch from St Bees Head, just south of Whitehaven in Cumberland, to the Mull of Galloway, the southernmost point of Wigtownshire, by which time the waters are those of the Irish Sea itself.

The lowest fordable point of the firth is reckoned to be up from Burgh by Sands, which is the limit of Hadrian's Wall, though the sand and mud flats of the firth move frequently and contain dangerous patches of quicksand and it is recommended that visitors do not attempt to navigate them without expert guidance.

The coasts are a variety. Cumberland is known for its mountains, but on the Cumberland side of the firth the Solway Plain stretches deep inland. The northern shore is deeply indented with estuaries and bays. Above the coastal plain is a landscape of lowland hills rising into mountains.

The Solway coast is a mainly rural area with the main industries being fishing and hill farming, and arable farming on the plain. Tourism also forms an important part of the local economy.

The Solway Coast was designated an Area of Outstanding Natural Beauty in 1964.[1] Construction of Robin Rigg Wind Farm began in the firth in 2007.

The water itself is generally benign with no notable hazards excepting some large areas of salt, mudflats and quicksand.

There are over 290 square miles of "Sites of Special Scientific Interest" in the area, as well as National Nature Reserves at Caerlaverock and in Cumberland.[2]

A 53-mile long-distance walking route called the Annandale Way,[3] running through Annandale from the source of the River Annan in the Moffat Hills to the Solway Firth, was opened in September 2009.[4].

Islands in the Solway

Unlike other parts of the west coast of Scotland, the Solway Firth is generally devoid of islands. However there are a few small, uninhabited isles by the north shore:

The famous Isle of Whithorn at the very furthermost of the firth is now peninsula though once an island and joined only by a causeway.

The Solway Firth forms the estuary of the River Eden and the River Esk.

The following rivers also flow into the firth:

The name 'Solway' is of Old English origin, and though there has been debate about the origin it seems settled that the name, first recorded in the thirteenth century, is that of a ford across the mud flats at Eskmouth. Sol wæþ means mud ford. The three fords in the area at that time were the Annan or Bowness Wath, the Dornock Wath (once called the Sandywathe), and the main one was the Solewath, or Solewath, or Sulewad.

Between 1869 and 1921, the estuary was crossed by the Solway Junction Railway on a 5,850-foot iron viaduct.[5] The line was built to carry iron ore from the Whitehaven area to Lanarkshire and was financed and operated by the Caledonian Railway. The railway was not a financial success. After the railway ceased operating, the bridge provided a popular footpath for residents of Dumfriesshire (which was dry on a Sunday) to walk into Cumberland where alcoholic drink was available. The viaduct was demolished between 1931 and 1933.