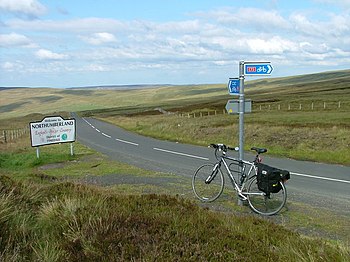 The C2C Summit near Nenthead

The route runs from Whitehaven on the west coast of Cumberland, and then crosses the Lake District and the Pennines using a variety of both on and off-road trails, ending on the north-east coast at Sunderland in County Durham. Claimed to be Great Britain's most popular long-distance cycle route, it is designed for the whole range of cyclists, from families to cycling club riders.

A northern branch splits off from the main route at Consett, County Durham, following the route of the Derwent Walk, passing through the towns on the River Tyne and ending at Tynemouth in Northumberland.

In 2005 a complementary route was opened further to the south. This, titled the Walney to Wear route (W2W), is designed to be slightly tougher and longer. It runs from Walney Island in northern Lancashire to Sunderland by way of the North York Moors and Durham.

Although a challenge with some hard climbs—the highest point being over 2,000 feet—the C2C is completed by an average of between 12,800 and 15,000 cyclists every year.

The C2C was developed by Sustrans and part of the National Cycle Network (NCN) in partnership with various local authorities, Groundwork West Cumbria, North Pennines Tourism Partnership, Forest Enterprise and the Lake District National Park amongst others.

The route was opened in 1994 from Whitehaven to Sunderland. The Walney to Wear route was added in 2005. 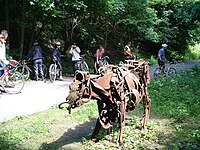 A number of public artworks have been commissioned for the route, including Tony Cragg's Terris Novalis at Consett, sheepfolds by Andy Goldsworthy at various points in Cumberland and Alison Wilding's Ambit in the River Wear at Sunderland.

On the Consett to Sunderland line, there are The Old Transformers by David Kemp below Pontop Pike mast near Annfield Plain and four steel cows by Sally Matthews near Beamish Museum.

The route starts at the sea, at Whitehaven, where many a dedicated C2C'er will dip his bicycle wheels in the waves of the Irish Sea to ensure he really goes from sea to sea. The route then starts in earnest through Whitehaven's former coal-mining and industrial lands that spread down the west coast of Cumberland, and travels through the stunning scenery of the northern Lake District, heading into Keswick before passing through Penrith in the valley of the River Eamont. From Penrith the route runs down to the broad Eden Valley with its lush valleys and sandstone villages, crossing the river at Langwathby. The route then climbs out of the Eden Valley to ward the Pennines, up to Hartside Pass and onto the Northern Pennines.

In the Pennines, the Sea to Sea follows an undulating ride as it meanders through old lead-mining villages, such as Garrigill, Nenthead and crossing its summit the route finally leaves Cumberland and enters Northumberland for a few miles before descending into County Durham. In Durham it goes on to Rookhope, and down into the Durham Dales before crossing Waskerley Moor and entering the old steel town of Consett by way of the Hownes Gill Viaduct.

From Consett it is an easy ride by way of Leadgate, Annfield Plain, Stanley, Beamish and through one of Britain's old industrial heartlands to the North Sea and Sunderland.

There is also the option of starting at Workington and/or finishing at Tynemouth and also a link route at Penrith to join up with the Glasgow to Carlisle section of the National Cycle Network. The route is made up of approximately:

The C2C is best ridden from west to east to take advantage of the prevailing winds from the west and the more favourable gradients. Tradition dictates that you start the ride by dipping your back wheel in the Irish Sea and only ends when your front wheel gets a dip in the North Sea at the finish. It is typically completed in 3–5 days, though it has been completed in a single day (the record is currently held by Joel Toombs and Matt Shorrock at 7 hours 53 minutes and 03 seconds west to east on 28 September 2012.The youngest person to complete the C2C in one day is Christian Webster-Reed, aged 15, who completed the C2C in a moving time of 8:56:04 and an overall time of 13:56:24 on 25 August 2013.

The route links to other parts of the NCN so can be used as part of a longer cycle tour.