Maryport is a town in Cumberland, standing on the coast at the uttermost of the Solway Firth. It is one of the string of West Cumberland towns along A596 road, with Workington to the south. It is also on the coastal railway line.

Maryport lies at the northern end of the former Cumberland Coalfield, which has been the main aspect of its growth in days gone by, though its origin is much older.

The first town here was first established by the Romans as the fort of Alauna in around 122 AD. The fort served as a command and supply base for the coastal defences of Hadrian's Wall at its western extremity. There are substantial remains of the Roman fort, which was the last in a series of forts stretching southwards along the coast from Hadrian's Wall, aimed at preventing Caledonian raiders from avoiding the Wall by a crossing of the Solway Firth.

Recent geomagnetic surveys have revealed a large Roman town surrounding the fort. A recent archaeological dig discovered evidence of a second, earlier and larger fort next to, and partially under the present remains. After the Roman withdrawal from Britain the town was soon reduced in size and importance. 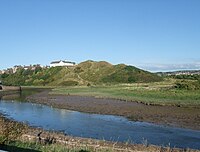 What became of Alauna after the Roman retreat or throughout the Early Middle Ages is not known.

On Castle Hill are the earthworks and buried remains of a twelfth century motte and bailey castle. On the summit are the foundations of a Second World War gun emplacement.

To the north are the ruins of Netherhall Estate. The only remains of this once grand manor are stables and a fourteenth century Peel Tower, formerly part of a large house of later date which was demolished in 1979 following a fire. 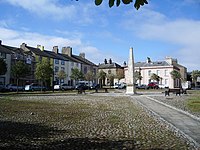 Formerly the town was named Ellenfoot, as it stands at the mouth of the River Ellen. The name was changed however by Humphrey Senhouse, the town's real founder.

Senhouse was the local landowner and in 1749 he obtained an Act of Parliament to allow the creation of the present town, which he named the new town after his wife, Mary. He began to develop Maryport as a port, following the example of Whitehaven.

The Senhouse family had extensive estates in the area were landowners in the area in addition to developing the town of Maryport they excavated its Roman past. The family also had interests in the West Indies. In 1770, Humphrey Senhouse’s son, William, was appointed Surveyor General of Customs in Barbados where he purchased a sugar plantation and managed another for Sir James Lowther of Whitehaven. William’s brother, Joseph, had a coffee plantation in Dominica. Both men were considerable slave-owners.[1]

It was during this period that the town's lighthouse was built. 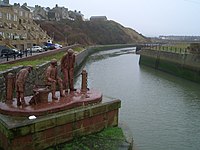 The town quickly developed as an industrial centre throughout the 19th century. An iron foundry opened and the port developed as did shipyards, such as Wood's yard and Ritson's yard, which was famous for launching ships broadside into the River Ellen because it was not wide enough to allow ships to be launched the usual way. By this time, coal mines were operating all around the town, at Ellenbough, Dearham, Broughton Moor, Gilcrux and Birkby.

The Maryport and Carlisle Railway opened in the 1840s, with George Stephenson as its engineer, and made the transport of coal much easier. Large new mines were sunk in the Aspatria area and almost all their output passed through the port. In 1846, 213,152 tons of coal were shipped from Maryport and by 1857 this had risen to more than 340,000 tons.

Much of the coal produced in the area was turned into coke for the local iron and steel industry. By 1890, the Allerdale Coal Company had thirty Beehive coke ovens working on its site at Buckhill, Broughton Moor.

In 1874, the owners announced a cut of 10% in the miners’ wages. A strike began in the Aspatria pits and then the owners made a further cut of 15%. By December, the strike had spread to the whole area with 2,000 men involved. The strike lasted until March 1875. There was violence when some ‘blacklegs’ were assaulted and many colliers left the area to seek work elsewhere.

In 1894, John Osmaston who operated the Dearham Colliery became insolvent and the bank took over his pits. Two groups of local miners formed co-operatives and leased the mines at Crosshow and Townhead from the Lowthers. They found it impossible to compete with the other wealthy coal-owners in a tight market and also had serious problems with drainage. This unique experiment ended in 1903 when both companies went into liquidation.[2]

During the early years of the 20th century, trade in the docks remained steady but was badly affected by the 1926 United Kingdom General Strike. Then, in 1927, a new deep-water dock was opened in Workington: previously, the Workington Iron and Steel works had imported much of their raw material through Maryport but all of this trade was immediately transferred to the new facility. The local Solway Blast Furnaces also closed.[3]

Maryport became a ghost town. The government declared West Cumberland a ‘Special Area’ but, by 1933, 57.3% of the town’s insured workforce was unemployed. 1,684 men were out of work. Maryport was “for the most part, living on public funds”[4]

Despite a minor boom during the Second World War, when coal from North East England was diverted to the port, Maryport never recovered. The docks were closed to cargo ships in the 1960s. The last deep pit in the area, at Risehow, closed in 1966 and open-cast mining ended in 2000.

Maryport, by the harbour

Tourism is now the main business in Maryport. There is an aquarium, a maritime museum and a Roman museum. The latter houses numerous Roman artefacts, most notably a series of altars to Jupiter Optimus Maximus, which were excavated in the 18th century from the parade ground of the Roman fort.

In July 2008, a new tourism venue, The Wave Centre, opened its doors. The Wave Centre is a theatre and conference facility, an interactive heritage exhibition on the local history of Maryport, the Tourist Information Centre for Maryport, and a gift shop and bistro.

The "Maryport Blues Festival" is held every summer, This has previously attracted big names in the Blues music scene. It is a three-day event which usually takes place on the last weekend of July, attracting both local and international artists.