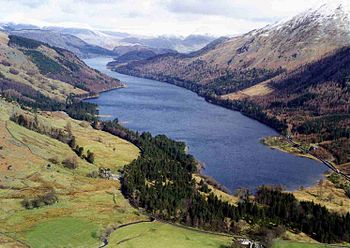 Thirlmere is a ribbon lake in Cumberland, one of the larger of the beauteous waters of the Lake District.

Thirlmere runs roughly south to north, with a dam at the northern end, and is bordered on the eastern side by the A591 road and on the western side by a minor road.

Notwithstanding its place amongst a landscape of lakes, Thirlmere is a reservoir, artificially created in the nineteenth century. It was constructed by the Manchester Corporation to provide the burgeoning industrial city of Manchester with water supplies. The water passes out of the lake through the Thirlmere Aqueduct; a tunnel 96 miles long which still provides water to the Manchester area. The Thirlmere Aqueduct remains the longest tunnel in the world.[1]

The name of Thirlmere also applies to the whole valley, which connects Grasmere in the south with the Vale of Keswick in the north. The highest point in the valley is Dunmail Raise. The A591 runs the length of the valley and goes over Dunmail Raise.

The Helvellyn ridge lies to the east of Thirlmere. To the west of Thirlmere are a number of fells; for instance, Armboth Fell and Raven Crag both of which give views of the lake.

Before the construction of the reservoir the site was occupied by two smaller lakes - Leathes Water and Wythburn Water. The growth of the industrial city of Manchester during the 19th century had led to an increased demand for water. The water level was raised by construction of a dam by the Manchester Corporation at the northern end of Thirlmere, in 1890–1894. The reservoir was then able to supply water to Manchester by way of the Thirlmere Aqueduct, roughly 100 miles long. John Frederick Bateman acted as advisor to the corporation for both projects.

There was strong local opposition to the construction of the lake and the Thirlmere Defence Association (TDA) was formed to oppose the private Act of Parliament which was required before work could begin. The TDA opposed on the basis that raising the water level by 50 feet would submerge the dramatic cliffs which then surrounded the lake and a receding shoreline in summer would expose the smelly and unsightly lake bed. The organisation managed to stall the reading of the Bill in parliament in 1878 but the Bill was passed at the second reading in 1879.[2]

The reservoir and surrounding forested valley is owned and managed by United Utilities, a private water and waste water company.