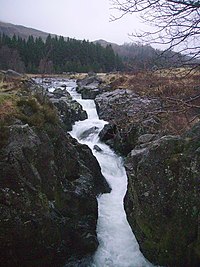 The Duddon in the gorge at Birks Bridge 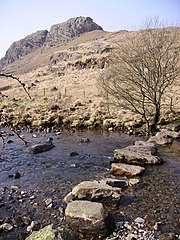 The River Duddon is a narrow, mountain river which for its whole length marks the boundary between Cumberland and Lancashire before entering the Irish Sea at Duddon Sands. It known for its salmon and its quiet beauty.

The Duddon rises 1,289 feet above sea level near the Three shire stone at the top of the Wrynose Pass which marks the point where Cumberland, Lancashire and Westmorland meet. From here the river tumbles south and southwest through Dunnerdale for fifteen miles to the sea.

William Wordsworth, the Poet Laureate, has a particular fondness for the River Duddon and its valley. He wrote about it in a collection of 35 sonnets about it, The River Duddon, a Series of Sonnets, with soaring phrases in praise of its beauty and quiet. 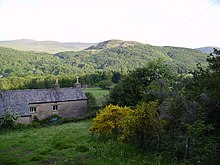 THE old inventive Poets, had they seen,
Or rather felt, the entrancement that detains
Thy waters, Duddon! 'mid these flowery plains

The valley of the Duddon is known as Dunnerdale. It is a pretty, agricultural dale slicing between the Cumberland fells to the west and the Furness Fells of Lancashire to the east. The dale is not so frequented by visitors as the rest of the Lake District and remains a calmer reminder of earlier days.

A haven for wildlife, in Dunnerdale one may watch Buzzards and Peregrine Falcons overhead and Red Squirrels in the trees, while in the high months the fields and hedgerows are decorated with bluebells, violets, primroses and wood anemones.

A single minor road runs down the dale. Dunnerdale is marked by scattered farms and has few villages. Here though are found Seathwaite, in Lancashire, and Ulpha, in Cumberland.

From this deep chasm, where quivering sunbeams play
Upon its loftiest crags, mine eyes behold
A gloomy niche, capacious, blank, and cold;
A concave free from shrubs and mosses grey

Seathwaite is the bigger village. It stands near the end of the ancient Walna Scar road. The Newfield Inn here was one of Wordsworth's favourite places to stay and today is popular with walkers. In 'The Excursion', Wordsworth writes of the village's long-time curate, the Rev Robert Walker who died in 1802 at the age of 92.

Ulpha lies further down the valley is smaller, with just one shop. The church of St John the Baptist ("as welcome as a star" according to Wordsworth) is of locally hewn stone. Distinctly painted wall decorations from the early eighteenth century have been found and the communion table is carved from a local tree.[1]

Frith Hall lies nearby in the dale in ruins. It was built in the sixteenth century and served as a hunting lodge, overlooking the deer park of Ulpha. The remains of Ulpha Old Hall stand at the foot of the Dunnerdale Fells. The hall was built around 1580- 1620, later than the days of the pele towers but bearing some echo of their form. All that now stand are an east-facing wall of around 4 feet thick pierced with a doorway and three other walls standing now only to the height of the ground floor.

Broughton in Furness marks the end of the dale and the sea. 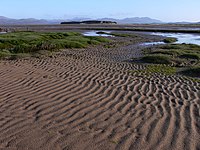 The river runs down to the salt marshes at Duddon Bridge and Haverigg, north-west of Morecambe Bay, before emptying into the sea. The stream is narrow in the estuary at low tide with broad, flat sands full of birdlife, turning into a long, broad estuary at the flood. The sands encompass 13 square miles and 28 miles of shoreline.

At the mouth of the estuary is Sandscale Haws nature reserve where the mud flats and saltmarsh provide a winter home to waterfowl.

The Duddon Sands also support a fifth of the national population of the rare natterjack toad, found at 50 sites in the United Kingdom, of which five are in the Duddon Estuary.

The estuary is botanically rich with salt marsh, sand dune and shingle communities, including a nationally rare shingle vegetation community at Haverigg Haws and North Walney.