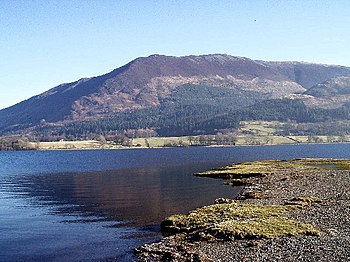 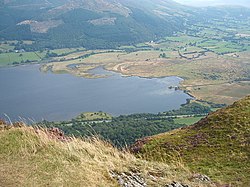 The southern end of the lake 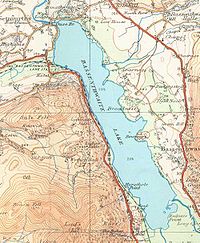 Map of the lake

Bassenthwaite Lake in Cumberland is one of the largest lakes in the Lake District. It is long and narrow, approximately 4 miles long and ¾ mile wide, but is also very shallow, with a maximum depth of about 70 feet.

The lake lies at the foot of Skiddaw, near the town of Keswick. It is fed by, and drains into, the River Derwent.

The A66 dual carriageway runs roughly north/south along the western side of the lake. The lay-bys are popular spots for photographers and bird watchers looking for osprey. The section running south towards Keswick was built along the course of the former Cockermouth, Keswick and Penrith railway line.

Bassenthwaite Lake is the only body of water in the Lake District to be named a "lake" as all the others are water or mere or tarn.

Some maps dating from the 18th century mark this lake with the name Bassenwater, and the use of the name Broadwater for this lake is also attested.

The lake's catchment is the largest of any lake in the Lake District. This, along with a large percentage of cultivable land within this drainage area, makes Bassenthwaite Lake a fertile habitat.

The lake contains salmon, trout, pike, perch, minnow, dace, ruffe and eel, though the predominant species is roach, which is believed to have been introduced in the form of discarded live-baits by visiting pike anglers. Also present was the vendace, until it was declared extinct within the lake in 2001. Cormorants have been known to fish the lake and herons can also be seen; at the turn of the 19th century there was a report of 60 nests in a heronry in nearby Wythop Woods. In 2001, ospreys returned to nest by the lake, and have done so regularly since.

The lake currently faces problems, which the Bassenthwaite Lake Restoration Programme[1][2] is trying to address. These include erosion, pollution (especially phosphates, which encourage algae formation)[1] and a number of alien types of flora, which are threatening to have an adverse effect on local species.

Water company United Utilities was fined £27,000 in 2011 for allowing raw sewage to pollute nearby Pow Beck watercourse.[4] The company's £20 million sewer improvement scheme, begun in 2011, aims to improve water quality in the River Greta[5] and the lake itself.[6] The project will facilitate removal of greater quantities of phosphates.[7] Works to upgrade the wastewater treatment works and pumping station were begun in May 2010.[3]

It has been reported that the wide gravel spreads between Derwent Water and Bassenthwaite Lake provided the best centre within Lakeland for Neolithic farming communities. Stone axes have been found in the area and particularly at Mossgarth, Portinscale.