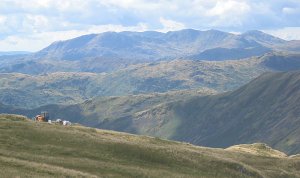 The Coniston Fells seen from Helvellyn 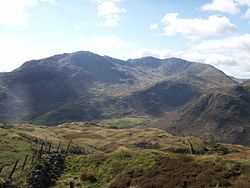 The Furness Fells are the fells and hills in High Furness; the northern part of Lancashire North of the Sands, and here are found Lancashire greatest summits, including the county's highest point, the Old Man of Coniston. The fells form part of the Lake District.

High Furness is roughly that part of Furness lying north of the line between Ulverston and Ireleth.

Tourism in High Furness was promoted by the writings of Beatrix Potter in the early part of the 20th century. Potter was one of the largest landowners in the area, eventually donating her many properties to the National Trust. It was not off the visitors’ maps before then though and some of William Wordsworth’s most soaring verses were written amongst these peaks.

Amongst these fells is only one noteworthy tarn, Seathwaite Tarn, which is nevertheless the third-largest tarn in the Lakes. The Furness Fells also meet the edge of the greatest lake of the Lake District, Windermere; the hills of the Grizedale Forest rising above its western shore. Coniston Water, one of the finest of the lakes, is in the heart of the Furness Fells, between the Grizedale Forest and the Coniston Fells. 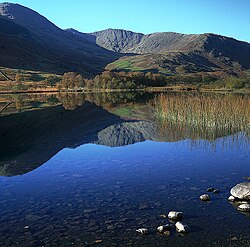 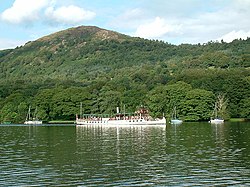 The highest point of the region is the Old Man of Coniston at 2,634 feet in the Coniston Fells, and its close companion to the north, Swirl How, which vies with it for height pending detailed measurement. Other notable summits include Dow Crag and Wetherlam and Swirl How, all amongst the central group known as the Coniston Fells.

Gummer's How is a prominent hill in the east of the region, near Fell Foot Park at the foot of Windermere. 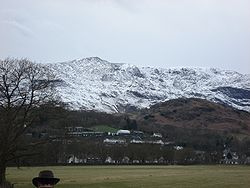 The Old Man of Coniston

The Coniston Fells are separated from the Scafell and Bowfell massif to their north by Wrynose Pass, and are surrounded on all other sides by lower ground. Coniston Old Man, the highest summit in the group, is the farthest south 2,000-foot summit in the Lake District (using a 100-foot relative height criterion to determine what is an independent summit).

The tops of the Coniston Fells may be climbed from many points, including the village of Coniston at their base, or from Seathwaite in the Duddon Valley, or from the Wrynose Pass.

Seathwaite Tarn above the Duddon is the third-largest tarn in the Lake District; Levers Water, Low Water, Goat's Water and Blind Tarn are also located in the Coniston Fells group.

The highest summits of the Coniston Fells are:

These summits all have more than 100 feet of relative height (a commonly used criterion for being a separate summit). Alfred Wainwright included three more tops and made mention of two more:

- and made appreciative mention of two more: 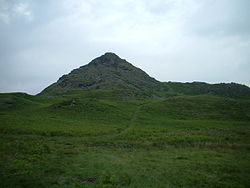 South of White Pike, there is a significant loss of altitude before the Dunnerdale Fells rise up. These are a distinct group of the Furness Fells, southwest of Coniston Old Man and looking over Dunnerdale, the valley of the River Duddon, which forms the border with Cumberland to the west.

Caw, at 1,736 feet, is the highest of this group, but Stickle Pike (1,230 feet) and those closer to the Duddon the most distinctive with their shattered rocks and pockmark tarns.

The Grizedale Forest lies east of the Coniston Fells, divided from them by the great dale in which lies of Coniston Water. The Forest extends westward to Windermere, which marks the border with Westmorland. This is a far gentler land than the great fells, for though some summits do reach over 1,000 feet, it is a place of more gently rolling hills and woodlands managed by the Forestry Commission.