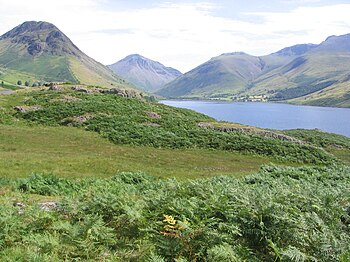 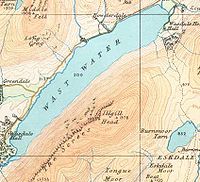 Wast Water or Wastwater is a lake lying in Wasdale, a valley amongst the Cumberland fells, in the western part of the Lake District.

The lake is almost 3 miles long and more than a third of a mile wide. It is the deepest lake in England.[1] at 258 feet, and is owned by the National Trust. It is one of the finest examples of a glacially 'over-deepened' valley. The surface of the lake is about 200 feet above sea level, while its bottom is over 50 feet below sea level. 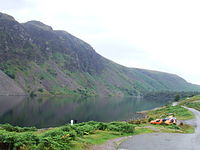 The head of the Wasdale Valley is surrounded by some of the highest mountains in England, including Scafell Pike, Great Gable and Lingmell. On 9 September 2007, Wast Water was announced as the winner of a vote to determine "Britain's Favourite View" by viewers of ITV.

The steep slopes on the south eastern side of the lake, leading up to the summits of Whin Rigg and Illgill Head, are known as the "Wastwater Screes" or on some maps as "The Screes". These screes formed as a result of ice and weathering erosion on the rocks of the Borrowdale Volcanic Group, that form the fells to the east of the lake, towards Eskdale. They are approximately 2,000 feet, from top to base, the base being about 200 feet below the surface of the lake.

A path runs the length of the lake, through the boulders and scree fall at the base of this craggy fell-side. On the north western side are the cliffs of Buckbarrow (a part of Seatallan) and the upturned-boat shape of Yewbarrow. Wast Water is the source of the River Irt which flows into the Irish Sea near Ravenglass.

"Wastwater" comes from that of Wasdale. The lake is named "Wast Water" on Ordnance Survey maps but the spelling "Wastwater" is used with roughly equal frequency, including by its owner, the National Trust and the Lake District National Park Authority. 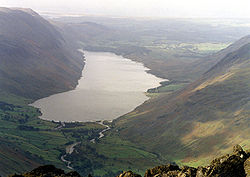 Wast Water seen from the summit of Great Gable

The Wasdale Lady in the Lake, Margaret Hogg, was murdered and her body was disposed of in the lake. She was found after eight years, with her body preserved like wax due to the lack of oxygen in the water.

In February 2005 it was reported that a "gnome garden" complete with picket fence had been placed in the lake as a point of interest for divers to explore. It was removed from the bottom of Wastwater after three divers died in the late 1990s.[2][3] It is thought the divers spent too much time too deep searching for the ornaments.

Police divers report a rumour that the garden had been replaced at a depth beyond which they were allowed to dive. PC Kenny McMahon, a member of the North West Police Underwater Search Unit, said "Wastwater is quite clear at the bottom, but there's nothing to see. At a depth of about 48m, divers had taken gnomes down and put a picket fence around them. But several years ago there were a number of fatalities and the Lake District National Park Authority asked us to get rid of them. We went down there, put them in bags and removed the lot. But now there's a rumour about a new garden beyond the 50m depth limit. As police divers we can't legally dive any deeper so, if it exists, the new garden could have been purposefully put out of our reach."

Water from the lake is pumped to the nearby Sellafield nuclear waste processing facility as a fresh water supply.[4] The NDA (Nuclear Decommissioning Authority) has taken over the licence once held by BNFL (British Nuclear Fuels plc) which allows them to extract from Wast Water a maximum of 18,184.4 m³ a day (over 4 million gallons) and 6,637,306 m³ a year from Wast Water to use on site for various processes including the cooling ponds and reprocessing.