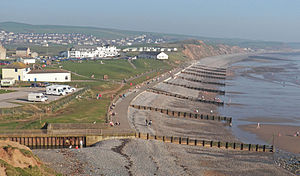 St Bees beach – the start of the walk

The Coast to Coast Walk is a 192-mile unofficial and mostly unsignposted long-distance trail across Cumberland, Westmorland and Yorkshire, from the Irish Sea coast to the North Sea coast. It was devised by Alfred Wainwright. The walk begins in the west at St Bees Head in Cumberland (54°29’31"N, 3°36’43"W) and finishes in the east at Robin Hood's Bay in the North Riding of Yorkshire (54°26’6"N, 0°32’6"W).

The walk passes through three counties and three national parks: the Lake District National Park, the Yorkshire Dales National Park, and the North York Moors National Park. Its highest point is Kidsty Pike in Westmorland, at 2,560 feet above sea level.

Wainwright recommends that walkers dip their booted feet in the Irish Sea at St Bees and, at the end of the walk, in the North Sea at Robin Hood's Bay.

The Coast to Coast was originally described by Alfred Wainwright in his 1973 book A Coast to Coast Walk. Due to legal restrictions on certain stretches of the path, increased traffic on some of the road sections, and erosion, the exact original route followed by Wainwright is not recommended. Wainwright's book has been revised a number of times in recent years (most recently in 2003) to provide a route that avoids trespass.

The route uses a variety of public rights of way including public footpaths, tracks, and minor roads.

Wainwright's book describes the route in 12 stages, each of which ends at a settlement with at least some overnight accommodation nearby. If one stage is walked per day, with one or two rest days, the route makes a two-week holiday, and web logs of coast-to-coasters seem to indicate that this is the most common way of walking the route. However, Wainwright explicitly states that he did not intend people to necessarily stick to these daily stages, or even to his route. For instance, the majority of Wainwright's stages start and end at low level with a single up-down during the day: many walkers split the Borrowdale–Patterdale stage at Grasmere in order to maintain this pattern and avoid having two major uphill sections in one day. Splitting two or three more of the longer stages, and adding a further one or two rest days, reduces the average day-length to 10 or 12 miles and makes the walk a much easier three-week trip with time to "stand and stare", an activity much approved of by Wainwright.

The Coast to Coast Walk has not been enrolled as an official “National Trail” but that does not stop it from being one of the most popular of all the long-distance footpaths in the United Kingdom. In 2004 the walk was named as the second-best walk in the world according to a survey of experts.[1] Harveys publish two dedicated strip maps at 1:40,000 scale. .

Route of the Coast to Coast Walk

The more popular direction to take the walk is from east to west, which is the direction given in the original and most of the current guides, and which keeps the prevailing wind and rain at ones back, and the evening sun out of one's eyes. Some walkers do start from the east coast, either because they wish to have the Lake District as the climax of their walk or because they have already walked the route in the conventional direction.

Wainwright's route begins at St Bees in Cumberland, on the Irish Sea. It crosses Cumberland’s coastal plain and the Lake District, through Westmorland, and enters Yorkshire as it crosses the Pennines. It then crosses the Yorkshire Dales, the Vale of York and the North York Moors to reach the North Sea coast at Robin Hood's Bay. 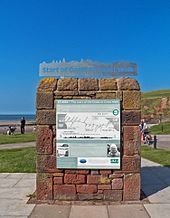 From Nine Standatrds Rigg, moorland trails and upland streams lead down into Swaledale. To help mitigate the effects of erosion, there are alternative routes at different times of the year. At almost exactly its halfway point, the Coast to Coast crosses the Pennine Way at Keld.

The following major headland is traversed by the route:

The following hills are crossed by the route: 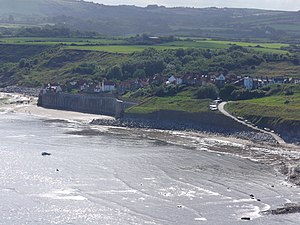