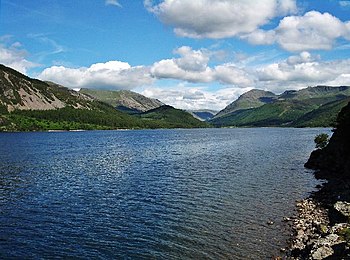 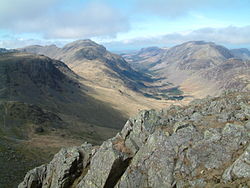 The valley from Green Gable

Map of Ennerdale Water from 1948

Ennerdale Water in Cumberland is the most westerly lake in the famous Lake District.

It is a glacial lake, with a maximum depth of 150 feet, and at half a mile to a mile wide and 2½ miles long it is one of the smallest lakes in the area.

The small village of Ennerdale Bridge lies to the west of the lake; with two pubs and a few houses, it is a typical small Cumberland village. Close by is the decayed port of Whitehaven, the town of Cleator Moor and the village of Cleator.

Ennerdale Water is owned by United Utilities, is both a reservoir serving over 30,000 customers daily and a Site of Special Scientific Interest due to its lake-shore habitats.

Due to the Ennerdale valley's remote location, the lack of a public road up the valley and its management by the Forestry Commission, the National Trust and United Utilities, Ennerdale Water is not as much visited by hikers, tourists and cyclists as other lakes in the Lake District National Park, and thus has not been spoiled by construction, activity on the lake or the trappings of intensive tourism.

The lake lies in Ennerdale, surrounded some of the highest and best-known fells in Cumberland including; Great Gable (2,949 feet), Green Gable, Brandreth, High Crag, Steeple and Pillar. The level of the lake has been artificially raised by construction of a weir to enable it to be used as a reservoir for Whitehaven.

Ennerdale Water is fed by the River Liza and other streams, and in turn feeds the River Ehen which runs to the Irish Sea.

In June 2012, it became clear that Ennerdale (specifically the Ennerdale granite to the south of Ennerdale Water) has been identified as a potential site for a Geological Disposal Facility for the UK's high level nuclear waste. Two other sites have also been identified - Eskdale and the Solway Plain. Ennerdale was not named explicitly by the Managing Radioactive Waste Safely Partnership but the reference to the 'granitic rocks forming part of The Lake District Batholith' is clear enough.

Though the Lake District is a popular location for film shoots, Ennerdale has been left relatively in the shadow, with only a few brief exceptions. The closing sequences of the film 28 Days Later (2002), directed by Danny Boyle, were filmed around the Ennerdale area, and include a sweeping, panoramic view of the lake.

In 1810 a large carnivore killed hundreds of sheep in and around Ennerdale before it was hunted down and killed. The locals dubbed it the Girt Dog of Ennerdale, though it was said by local legend to have had the traits of both a dog and a large cat.

Once a year, during the last week in August, the Ennerdale Show brings local people together with agricultural displays, competitions, arts and crafts.

The former American President Bill Clinton proposed to his wife Hillary on the banks of Ennerdale Water in 1973.[1]

In 2003 the valley's three major landowners formed the Wild Ennerdale Partnership with a vision "to allow the evolution of Ennerdale as a wild valley for the benefit of people, relying more on natural processes to shape its landscape and ecology".