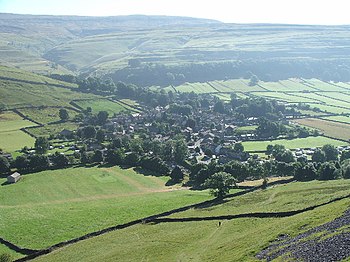 Kettlewell, Yorkshire, on the Dales Way

The Dales Way passes through two National Parks: the Yorkshire Dales National Park and the Lake District National Park. The first half of the walk follows the River Wharfe upstream to the main east-west watershed this part of Britain at Ribblehead. The second half follows several river valleys - Dentdale, the River Mint, then over into Westmorland to the River Kent – to descend to the shores of Windermere.

The walk is shorter and less strenuous than more well-known routes such as the Pennine Way and Coast to Coast Walk, being mostly along river valleys. It thus makes a good introductory training ground for these "serious" walks while being well worth doing in its own right. The section from upper Wharfedale (Langstrothdale) over the watershed at Cam Houses and down into Ribblesdale is steep (both going up and down).

It is feasible (for those more interested in a challenge than the enjoyment of the walk) to complete the walk the route in around four days, but most walkers take about a week, dividing the route into sections of 10 to 15 miles per day and taking a "rest day" or two.

Planning an itinerary is generally easy. Public transport (including Windermere steamers) is good at both ends of the route (railway stations at Ilkley and Windermere). The popularity of the walk (and the area generally) means that there are many choices of accommodation – for instance, nearly all pubs along the route offer bed and breakfast.

Places on the trail

The Wharfe between Kettlewell and Starbotton

The towns on the route are Ilkley and Bowness-on-Windermere at either end, and the small town of Sedbergh in Dentdale. Kendal, a little larger than the foregoing, is not far from the route.

Another notable place is the stone village of Dent, with very little modern housing. Along Wharfedale, the route passes through the villages of Grassington and Kettlewell.

Just before it reaches the end at Bowness-on-Windermere the route connects with the Windermere Way.

The route can lure the inexperienced into insouciance: the pretty, gentle slopes suddenly turn, on the higher Pennine fells to more gruelling conditions. In the central section, over the watershed, come the greatest ascent and descent, and is rather remote for anyone who finds himself in difficulty.

The less fit walker needs to arrange accommodation in order to make this section as short as possible. This will almost certainly involve at least one night in a remote farmhouse or pub, because the novice will probably find that the climbing involved will make the walk from Kettlewell or Buckden to Dentdale much too long a day. This is not too difficult to arrange as there are pubs at Hubberholme and Ribblehead, and farmhouse/bunkhouse accommodation in Langstrothdale and (on top of the watershed) at Cam Houses.