Datchet is a village on the north bank of the River Thames in Buckinghamshire, close to Windsor, which is upstream on the opposite bank.

The village developed because of its close proximity to Windsor and the ferry service which connected it to the main London road across the River Thames. The ferry was later replaced by three road bridges and two rail bridges across the river.[1]

The name "Datchet" is thought to originate in the old British language, and the last part may be related to cet ("wood"). In Domesday Book it is called Daceta.

The Bridge is a multi-functional, ecumenical centre of the village, created by the Anglican, Baptist and Roman churches as a joint Parish Centre in 1994. The building, on the north side of The Green, was built in 1750 and was a grocer's shop until it closed.

There is evidence of people living in the area which become Datchet shortly after the end of the last ice age, between 10,000 and 6,500 years ago, and of a settlement some 2,700 years ago.[2]

The earliest extant record of Datchet is between 990 and 994, when King [[Æthelred ("the Unready") made small grants of land here. Datchet Manor is listed in Domesday Book of 1086, when it was held by Giles de Pinkney.[3]

In 1150, the church already existed in Datchet and the Pinkney family sold it to the Abbey of St Albans, Hertfordshire. As such the Abbot became rector]] as improprietor of the parish and had the right to appoint vicars.

Datchet Mead and Datchet Ferry in 1686

There was a ferry at Datchet Ferry which provided a shorter route from London to Windsor Castle and was frequently used by royalty. In 1249, Henry III gave a great oak from his Windsor forest to make a barge for passage from Windsor to Datchet. In 1350, Edward III gave Datchet Church as part of the endowment of his new church and college of St George at Windsor Castle. On the Dissolution of the monasteries, the Crown confiscated the rectory, which was sold by Parliament in 1659 to William Stanbridge and Thomas Roberts.[3]

In the 17th century, traffic went to London by way of Horton. Horton Road began to be built up and extended by the wealthy next to the hovels of the poor. The great plague came to Datchet before and after the great plague of London. An unsubstantiated story is that Charles II kept his mistress Nell Gwynne at Old Bridge House in Datchet. 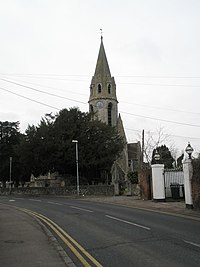 In 1706, the ferry that carried the Windsor Road traffic across the Thames was replaced by Datchet Bridge. The crossing was replaced three times until it was finally demolished in 1851 after the establishment of Windsor Great Park. As the original alignment of Windsor Road was severed by the new Royal Park, the bridge was no longer usable. Traffic between Old Windsor and Datchet now uses a southerly route across Albert Bridge.

In 1742, John Montagu, 2nd Duke of Montagu bought Datchet manor, and his family owned it until at least 1925; at one point it was owned by the head of the influential Montagu-Douglas-Scott family, Henry Scott, 3rd Duke of Buccleuch.[3]

In 1790, a workhouse was built in Holmlea Road and in 1820 an almshouse belonging to the workhouse was turned into a shop. In 1848, the first train went through Datchet to Windsor and by 1860 Datchet Common's beer house, The Plough, was in existence. In 1886, Datchet was known as Black Datchet because of a large number of bad characters living there. This was borne out by Aylesbury County Jail having one building known as the 'Datchet Wing' filled mostly with poachers.

Jerome K Jerome's Three Men in a Boat describes Datchet as a minor riverside resort. This has descriptions of the Manor Hotel and the Royal Stag.

From 1911 to 1914, cars were made at workshops at the end of Holmlea Road; Lord Montagu was the landlord. In 1911, Sir Thomas Sopwith landed his light aircraft in Datchet eight years after the first flight in the USA by Orville Wright.

Windsor Guards polo grounds in Horton were where the Queen Mother Reservoir now stands. The houses opposite were built in the late 19th century to house the workers on the grounds. 140 Horton Road was an old school house.

Datchet railway station is on the Windsor and Eton Riverside to London Waterloo line with a journey time of around 55 minutes.[4]

Datchet Manor is now a hotel and conference centre. The history of the manor begins in 1335 when King Edward III gave the manor of Datchet to William de Montacute, who then passed it on to Sir John Molins, who held it until 1631.

There is one pub in Datchet, The Royal Stag.

Datchet has several sports clubs including: