Wendover is a small market town in Buckinghamshire, at the foot of the Chiltern Hills, to the south-east of Aylesbury.

The parish of Wendover is 5,832 acres in size, mainly of arable farmland and it contains many hamlets that nestle in amongst the lush forest on the surrounding hills.

The parish church of St Mary sits outside the town to the east on the hillside.

The town name is of uncertain origin: it is claimed to be from the old British language, meaning "white waters" (Welsh: dyfroedd wen), pertaining to the stream which rises in the adjacent chalky hills and flows through the middle of the town. It may though be plain Old English; "course bank", "winding bank" or any number of possibilities.

The town has had a Royal charter to hold a weekly market since 1464, which is an attribute of a town rather than a village, although today’s Wendover folk often prefer to call their home a village.

Wendover is popular commuter town for those working in London. The popularity is due partly to the town's easy access to London by road, partly to Wendover railway station, served by Chiltern Railways from London Marylebone]] by way of Amersham, and partly because it is so picturesque. Property values have risen dramatically in recent years since the completion of the Wendover Bypass, which removed a lot of traffic from the town's narrow streets. There are four schools in the town.

A distinctive red brick, spired clock tower stands at the crossroads in the centre of the town, which was built in 1842. The tree lined Aylesbury Street includes the 16th-century timber framed Chiltern House and 18th-century Red House. 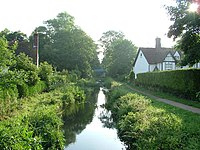 The Wendover Arm at Halton

Wendover is at the terminus of the Wendover Arm of the Grand Union Canal, which joins the main canal beside Marsworth top lock. Disused for over a century, the arm is in course of being restored by the Wendover Arm Trust.[1] Remote and rural for almost all its length, the canal attracts much local wildlife.

Wendover was well known for having a varied and diverse range of pubs, many of which have now closed due to the constraints and geographics of the day. The pubs that still exist today are The Red Lion, The George & Dragon, The White Swan, The King and Queen, The Pack Horse, The Marquis of Granby, which was renamed in 2010 and is now called The Village Gate, The Rose & Crown and The Shoulder of Mutton.

Wendover also plays host to the 'Coombe Hill Run' which usually occurs on the first Sunday of June every year. It begins and ends in the village and encompasses two very steep climbs up the Hill to the monument along with a very steep decline. Legend states that a boy from Wendover can only become a man once he has completed the course for the first time.

The many hillside hamlets around in Wendover and attached to the parish, which include:

Wendover was granted had a royal charter in 1464 permitting it to hold a weekly market, which it continues to do. 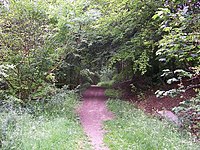 Path in the Wendover Woods

The village has a splendid location, sitting in a gap in the Chiltern Hills (and a designated "Area of Outstanding Natural Beauty").

Wendover has much to offer both local people and visitors wishing to explore the local countryside. The area is very popular with walkers, cyclists and horse riders. The frequent train service from London Marylebone makes it an ideal destination for a day trip to the country. The Ridgeway National Trail, a route that extends from Avebury to Ivinghoe and indeed far beyond, passes along Wendover High Street.

Apart from the Ridgeway Trail there are 33 miles of public rights of way and bridleways criss-crossing the parish. These paths will take you over the open chalk downland of Coombe Hill, Buckinghamshire, home to Britains longest surviving geocache, with its impressive monument to the Buckinghamshire men who died in the Boer War, or walk to the pretty hamlet of Dunsmore in the spring and enjoy the carpet of bluebells.

The Wendover Woods roll over the countryside, with shaded woods on Haddington Hill and Boddington Hill. On Haddington Hill is Buckinghamshire's county top and the highest point in the Chilterns. In the woods are a number of waymarked paths and trails, including specially prepared cycle routes, all ability walks, barbecue sites as well as play areas for children.

Close to Boddington hill there are the remains of an Iron Age hill fort.

A further attraction is the walk along the Wendover Arm of the Grand Union Canal, extending for approximately five miles from the centre of Wendover, to Tring. This section of the canal is currently the subject of a long term restoration project and has become home to many varieties of wildlife, including a colony of mandarin ducks.

The proposed High Speed 2 rail line from London to the Midlands takes a route immediately to the West of Wendover; two hundred yards from the end of the High Street. This route was confirmed, with some minor amendments, on 20 December 2010. To the South, the line would pass through Wendover Dean and Great Missenden before going underground at Amersham. To the North, it passes close by Aylesbury. Protests have been launched about the route's location through areas of outstanding natural beauty and potential noise disruption, and a Wendover lobby group formed, with a 300 strong protest filmed by the BBC in December 2010.[2][3]

Wendover Football Club was founded over 100 years ago. The club currently shares the school fields of the John Colet School and a clubhouse is open each Saturday afternoon for either a first or a reserve team fixture. The team strip is Gold and Black stripes.