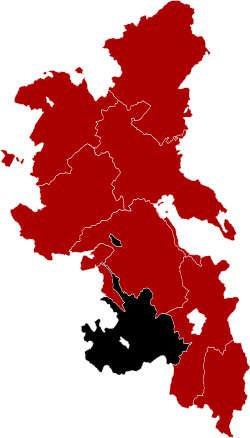 Desborough Hundred is a hundred in Buckinghamshire. It is situated in the south of the county and is bounded on the west by Oxfordshire, and on the south the River Thames marks the border with Berkshire. It had a population of 142,944 in 2011.

Until at least the time of the Domesday Survey in 1086 there were 18 hundreds in Buckinghamshire. It has been suggested however that neighbouring hundreds had already become more closely associated in the 11th century so that by the end of the 14th century the original or ancient hundreds had been consolidated into 8 larger hundreds.[1] Desborough hundred is one of three hundreds which became collectively known as the Chiltern Hundreds around the 13th century, the others being Burnham Hundred and Stoke Hundred. Even before this time these individual hundreds had become special possessions of the Crown and were together stewarded as a royal bailiwick, occupying the place of any dukedom, earldom or barony that might otherwise have had absolute possession of the whole area. Eventually, the role of Steward of the Chiltern Hundreds persisted in name only, becoming a government-led appointment, and from 1751, a disqualifying sinecure for any elected members of the House of Commons.