From Wikishire
(Redirected from Thames)
Jump to: navigation, search

The Thames in Westminster 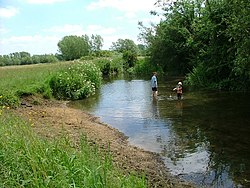 The course of the Thames

The River Thames is the major river of southern England. It is best known because its lower reaches flow through central London, but the river flows alongside several other famous towns and cities, including Oxford, Reading, Henley-on-Thames, Windsor, Kingston upon Thames and Richmond, and then many riverside towns and suburbs of the metropolitan conurbation.

The river rises in the Cotswolds of Gloucestershire and flows 215 miles generally eastwards to the North Sea, opening into a broad estuary between Essex and Kent. It forms for almost its entire length the borders of the counties on its banks.

The Thames is the longest river in the United Kingdom after the Severn; and the longest river entirely in England. It rises at Thames Head in Gloucestershire, near Kemble (Wiltshire), and enters the North Sea in the Thames Estuary after a long journey flowing east. It has a special significance in flowing through London, the capital of the United Kingdom, although the stretch through London only forms a short part of its course.

The river is tidal in below Teddington Lock, with a tidal range of 23 feet. The river's drainage basin covers a large part of south-eastern and western Britain and the river is fed by over 20 tributaries, some of them sizeable rivers in their own right. The river contains over 80 islands, and having both seawater and freshwater stretches, it supports a variety of wildlife.

The river has supported human activity from its source to its mouth for thousands of years, providing habitation, water power, food and drink. It has also acted as a major highway through the Port of London for international trade, internally along its length and by its connection to the British canal system. The river's strategic position has seen it at the centre of many events and fashions in British history, earning it a description by John Burns as "Liquid History". It has been a physical and political boundary over the centuries and generated a range of river crossings. More recently, the river has become a major leisure area supporting tourism and pleasure outings as well as the sports of rowing, sailing, skiffing, kayaking, and punting. The river has had a special appeal to writers, artists, musicians and film-makers and is well-represented in the arts. It is still the subject of various debates about its course, nomenclature and history.

Name of the River

The Thames derives its name immediately from the Old English Temes, and its spelling from other sources. The name though is much older, coming from the Iron Age Celtic name for the river, Tamesas (from *tamēssa),[1] recorded in Latin as Tamesis and underlying the modern Welsh name for it: Tafwys.

The original meaning of the name is lost, though many philologists and others have essayed solutions:

The river's name has always been pronounced with a simple t /t/; the Old English spelling was Temes and the Middle English typically Temese, while the familiar Latin was Tamesis. The th spelling lends an air of Greek to the name and was added during the Renaissance, possibly to reflect or support a belief that the name was derived from River Thyamis in the Epirus region of Greece, whence early Celtic tribes were romantically imagined to have migrated.

The Thames through Oxford is often given the name the River Isis. By the relentless logic of the Victorian Age, gazetteers and cartographers insisted that the entire river was correctly named the River Isis from its source until Dorchester-on-Thames where the river meets the River Thame and becomes the "Thame-isis". Ordnance Survey maps still label the Thames as "River Thames or Isis" until Dorchester. However, since the early 20th century, this distinction has been lost in common usage outside Oxford, and historians believe the name Isis is nothing more than a students' contraction of Tamesis, the Latin name for the Thames.

The Thames appears however to share a name origin with several other rivers similarly named, in which philologists have identified amongst others the Thame; Tame; Tamar; Tavy; Taff; and Tees.

For merchant seamen, the Thames has long been just 'The London River'. Londoners often refer to it simply as 'the river', and gauge location as in expressions such as 'north of the river' or 'south of the river'.[6] 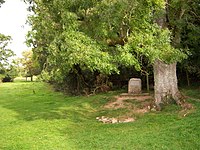 The marker stone at the official source of the Thames 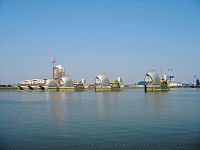 The Thames is 215 miles long. Its usually quoted source is at Thames Head (at ST980994), about a mile north of the village of Kemble and near Cirencester, in the Cotswolds.[7]

Seven Springs near Cheltenham, where the River Churn rises, is also sometimes quoted as the Thames' source,[8] as this location is furthest from the mouth, and adds some 14 miles to the length. The springs at Seven Springs also flow throughout the year, while those at Thames Head are only seasonal.

The Thames is the longest river entirely in England, but for length it is bested by the River Severn; the longest in the United Kingdom.

Towns and villages on the Thames

The Thames passing the sights of London

The Thames flows through or alongside many towns and villages, amongst which the larger towns to London are:

The present course is the result of several minor redirections of the main channel around Oxford, Abingdon and Maidenhead and more recently the creation of specific cuts to ease navigation.

In central London, the river forms one of the principal axes of the city, from the Palace of Westminster to the Tower of London and forms the southern boundary of the mediæval city, with Southwark on the opposite bank.

Past central London, the river passes between Greenwich and the Isle of Dogs, before flowing through the Thames Barrier, which protects central London from flooding by storm surges.

Below the barrier, the river passes Dartford, Tilbury and Gravesend before spilling its waters into the Thames Estuary, reckoned for convenience to begin at Southend-on-Sea.